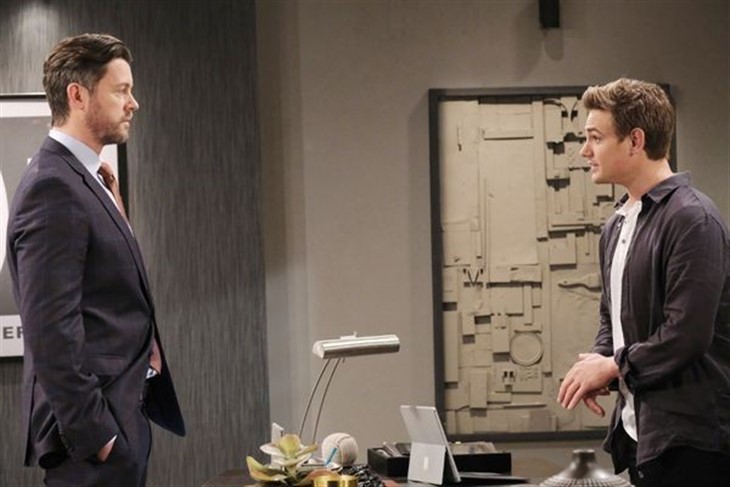 Days of Our Lives spoilers and updates tease that once he and Wendy Shin (Victoria Grace) return from Jakarta, he’ll tear into his father EJ DiMera (Dan Feurreriegel). As he tears into EJ, she’ll tear into her brother Li Shin (Remington Hoffman) over the brainwashing of Stefan DiMera (Brandon Barash).

Days Of Our Lives Spoilers – Home To Chaos

Johnny will return home to chaos, with his paternal grandmother dead and his good friend to blame for it; and she’s presumed dead too. His father’s drinking heavily, but at least he’s blaming himself partially even though he will never admit to contributing to Ava Vitali’s (Tamara Braun) distress. EJ just blames himself for not killing Ava to begin with instead of having pity on her and trying to force her out of town.

EJ had no compunctions about driving Ava to insanity or his part in conspiring to have his own brother brainwashed and no compassion. So Johnny has no compassion for him and lays into him for Stefan’s brainwashing.

Johnny lays a real guilt trip on his dad and makes sure he’s good and sober before he starts in on him. EJ might want to blame Ava for Susan Banks’ (Stacy Haiduk) death but when you come right down to it, it’s on him. Johnny’s own anger and grief for his grandma Susan plays into his outburst as well, but as far as he’s concerned, if EJ goes along with brainwashing his brother he’s guilty. He wants to deny his brother his happiness and push Gabi Hernandez (Camila Banus) into a marriage she doesn’t really want, and that’s not what family does. And how does Johnny’s father respond-he wants Johnny to keep secret everything he learned in Jakarta-Grandma Susan would be ashamed of EJ and Johnny lets him know it.

Days Of Our Lives Spoilers – Johnny DiMera Is Livid

Johnny is livid, and he wants no part of the family business or his father going forward; he’s not sure where he will go. But it’s doubtful his relatives will let him be homeless, he has Chad DiMera (Billy Flynn) on his side and his two Brady uncles and an aunt. EJ gets pretty nervous when Johnny threatens to tell Stefan himself about what he knows – he’s not operating with true knowledge and Stefan can fire EJ.

EJ begs Johnny to keep it under his hat and not rock the boat or many lives could suffer. At this particular moment, however, Johnny simply doesn’t care.

The Young And The Restless Spoilers: Jeremy Locates Diane, Does He Have Revenge In Mind?