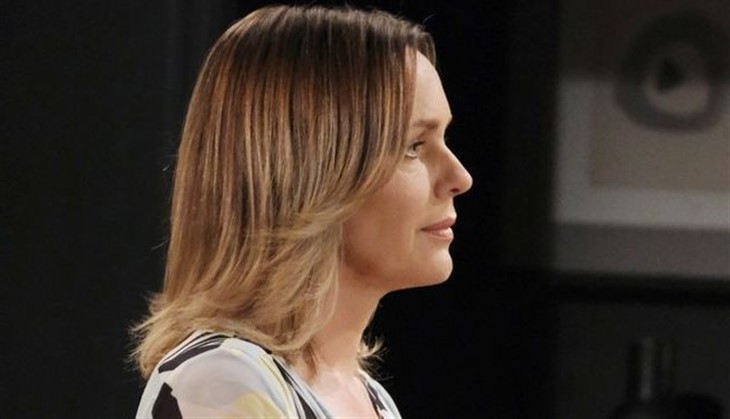 Days of Our Lives (DOOL) spoilers for Friday, December 2, 2022, reveal Nicole acting first and thinking second — if she even thinks at all.

Nicole Walker (Arianne Zucker) certainly was not expecting Jada Hunter (Elia Cantu) to have an abortion and Eric Brady (Greg Vaughan) to blame her for it. She didn’t actually use the word abortion when she had her little talk with Jada about how horrible it is to be a single mother. However, she did have to admit to Eric she didn’t want Jada to keep the baby. Now, Eric is not sure he wants anything to do with Nicole so she has to drown her sorrows somewhere, right?

It’s a good thing EJ DiMera (Daniel Feuerriegel) is also wallowing in self-pity after seeking revenge on Ava Vitali (Tamara Braun) and losing his mother, Susan Banks (Stacy Haiduk), to Ava’s crazy ways. Even Johnny DiMera (Carson Boatman) doesn’t want to have anything to do with him anymore. When EJ and Nicole drown their sorrows in some alcohol, one thing leads to another and well, we know what that other is. With Nicole’s luck, Eric will decide he wants her by next week and now she’ll have yet another secret to keep.

John Black (Drake Hogestyn) and Marlena Evans (Deidre Hall) are still stunned at the fact that Brady Black dumped Chloe Lane (Nadia Bjorlin) in exchange for Kristen DiMera, but they do know why he did it. Now, they fear that Kristen is manipulating Brady into doing more things he doesn’t want to do. Of course, they are correct, but what will they even do about it?

Chad DiMera (Billy Flynn) has his own problems as he comes to the realization that Stephanie Johnson (Abigail Klein) and Alex Kiriakis (Robert Scott Wilson) have grown closer. In fact, they seem to be involved in a full-fledged romance now and Chad is surprised to find he is quite jealous. However, he hides those feelings because male pride and all.

Days Of Our Lives Spoilers – A New Friendship?

Leo Stark (Greg Rikaart) and Sonny Kiriakis (Zach Tinker) started out with a professional relationship that then went personal, but it was all part of a con to blackmail Sonny. Heck, Will Horton (Chandler Massey) and Sonny even thought they had killed Leo at one point. Then, it was enemies all the way.

On Friday, it looks like friends all the way as Leo is shocked when Sonny offers him some help.= he desperately needs. Stream Days of Our Lives weekdays on Peacock by 6 am EST to see how these stories play out.

B&B Spoilers: Taylor And Brooke Have It Out