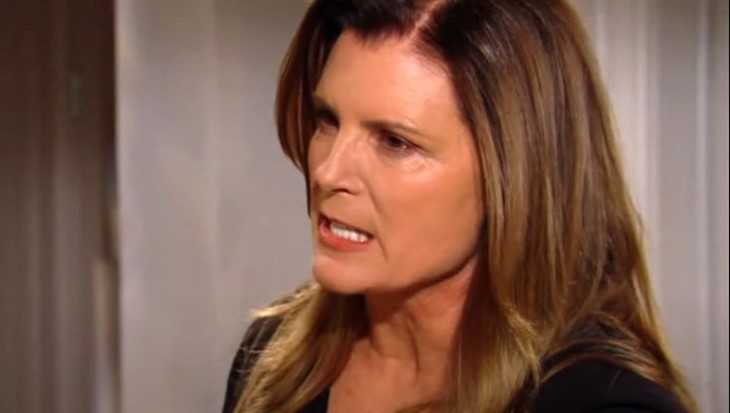 The Bold and The Beautiful (B&B) spoilers and updates tease Sheila Carter’s (Kimberlin Brown) sneaky trips could bring Deacon Sharpe (Sean Kanan) a dangerous dilemma. Deacon warned her that one of these days one of her little “field trips” could get them both in trouble, even if she does wear a disguise.

Deacon warned that disguise or not, someone could figure out that “Lina” or “Debra” or whatever name she’s using at the time is really her. It seems that she’s staying with “Lina” at the moment, and talking with a thick foreign accent. There were two times she was almost busted there in Deacon’s apartment – once by his probation/parole officer and another time when Hope Logan (Annika Noelle) showed up.

Hope stared at her and seemed to think there was something vaguely familiar about her, luckily Deacon arrived back home to interrupt, but the next time could be different. Hope was surprised about her dad’s new girlfriend, and a live-in at that, but luckily also for them, she had issues in her own life to deal with.

B & B Spoilers – Deacon Sharpe Worries

Deacon obviously worries about those little trips outside the apartment but she downplayed the danger and even said she picked up some new wigs. Where she is getting the money to finance all her disguises and presumably pay Deacon something towards expenses is a mystery. It’s possible that Sheila could have cashed in a life insurance policy when she faked her own death, but she’d have had to use a beneficiary name. The only daughter she has that might still communicate is Mary Warwick (Courtnee Draper) Sheila’s daughter with James Warwick (Ian Buchanan) who also goes by Erica Lovejoy. Sheila claims none of her children will have anything to do with her anymore, as the reason she’s focusing in on John “Finn” Finnegan (Tanner Novlan).

The Bold And The Beautiful Spoilers – What About Diana Carter?

Sheila wants to be close to and part of her family, and she does have another daughter with ties to Ridge Forrester (Thorsten Kaye) named Diana Carter (Weston and Mason Bodle). She hasn’t been seen since she was a baby but her father was Massimo Marone (Joseph Mascolo) so that means she’s Ridge’s half-sister and Steffy Forrester’s (Jacqueline Macinnes Wood) aunt. Diana would be Thomas Forrester’s (Matthew Atkinson) aunt as well as being related to Ridge’s grandchildren, and Sheila escaped with her when she was a baby.

Diana would only be around nineteen or twenty years old so it’s hard to say where she wound up although it would make sense Sheila gave her up for adoption. An upcoming spoiler shows Finn doing some detective work which Steffy’s not in agreement with, so he might be looking for Diana.