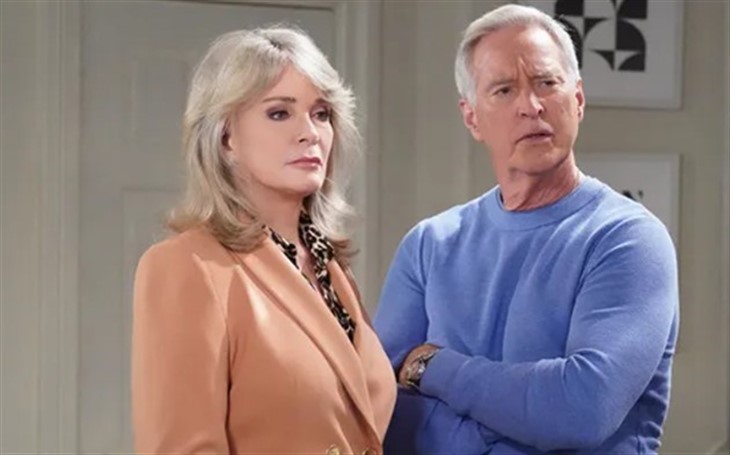 Days of Our Lives spoilers and updates tease that John Black (Drake Hogestyn) and Marlena Evans (Deidre Hall) will have no choice but to take action. They’ll worry about how Kristen DiMera (Stacy Haiduk) is manipulating Brady Black (Eric Martsolf) and they might confront her over it.

Days Of Our Lives Spoilers – Kristen DiMera Takes Too Many Liberties

There no doubt that Kristen takes too many liberties even though she and Brady are supposedly reconciled. For one thing, the Marlena Barbie doll that Marlena dug out as a fond remembrance of Susan Banks (Stacy Haiduk) isn’t for Rachel Black (Finlay Rose Slater) to play with. Kristen’s caught handling the doll and perhaps thinks it’s a special present for Rachel, but is no doubt quickly corrected.

Susan, who presumably died in a horrible explosion when Ava Vitali (Tamara Braun) drove off a cliff with her in the car had this doll made for Marlena. To Marlena, it’s almost as if she had an urn with Susan’s ashes on her mantel and Kristen has no business even touching it.

John and Marlena are definitely suspicious that there is more to the story than Brady suddenly breaking up with Chloe and reconciling with Kristen, even if supposedly it is for Rachel. The older Rachel gets the more manipulative she gets, obviously taking after her mother even though Brady has done his best to prevent it. John especially suspects that Kristen has something she’s holding over Brady to make him break up with Chloe so suddenly and reconcile with her. Chloe was literally moving her things out when Kristen was moving in, and gloating to boot, and that was the most suspicious. Neither realize that Kristen had been caring for the last rare orchid on earth that the serum was made from that previously saved Marlena’s life along with the others poisoned.

Days Of Our Lives Spoilers – Brady Black Admits Nothing

According to Days of Our Lives spoilers, John and Marlena have both questioned Brady, but he admits nothing; but they can both tell he’s been manipulated if not leveraged by Kristen. Now she makes a big deal about getting him under mistletoe, and it’s obvious Brady is disgusted when he gives into her kisses, which is understandable. It was a photo online of Brady and Chloe sharing an at the time innocent mistletoe kiss that got her all riled up a couple of years ago.

She was riled up enough to get Susan to swap places with her in prison while she did things like kidnap Sarah Horton Cook (Linsey Godfrey). John and Marlena confront Kristen over her obvious manipulations of Brady, but she too responds with silence.