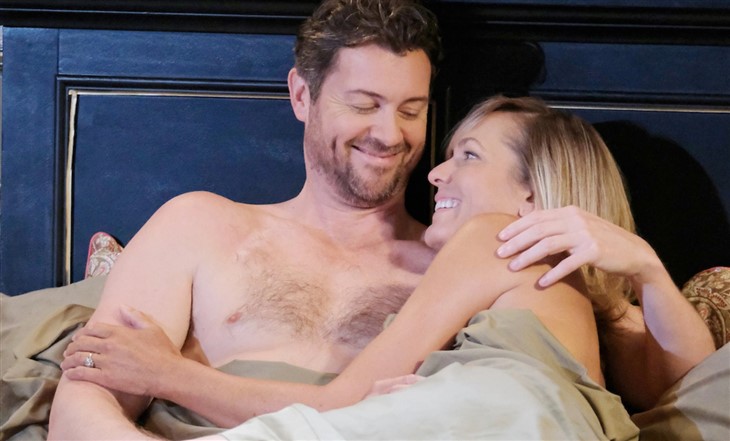 Days of Our Lives spoilers suggest that E.J. Dimera (Dan Feuerriegel) and Nicole Walker (Arianne Zucker) will get a bit wild while drowning their sorrows. Nicole and Eric Brady (Greg Vaughan) have fought over Jada Hunter (Elia Cantu) and E.J. is distraught over his mother’s presumed death. What will these two get into before falling into bed together?

Days Of Our Lives Spoilers – E.J.Dimera’s Confrontation With Ava Vitali

Days Of Our Lives spoilers reveal that during the week of November 28 – December 2 E.J. will have an intense conversation with Ava Vitali (Tamara Braun). It is unclear if Ava is alive or if this conversation takes place in E.J.’s head. However, Susan Banks (Stacy Haiduk) is still presumed dead at this time. Johnny Dimera (Carson Boatman) has also learned the truth by now leading to an explosive confrontation.

Johnny knows what happened to Stefan Dimera (Brandon Barash) and Johnny knows that E.J. condoned it. Johnny may even go as far as to tell E.J. that he is to blame for Susan’s death because of this. After all, E.J.’s greed is what caused him to keep quiet about what Li Shin (Remington Hoffman) had done. Will Johnny tell his father that this is his punishment for that?

DOOL Spoilers – There’s A Tear In My Beer

E.J. may feel like everyone is blaming him for how he handled his mother’s kidnapping and will decide to go have a few drinks. It’s unlikely that E.J. will be drinking beer but he will certainly be crying in something. After all, E.J. just lost his mother and is likely the reason for her death, he was the one chasing Ava when she drove off the road.

Spoilers say that Nicole will have a similar experience when she had a major fight with Eric. Nicole is the one who just convinced Jada to get rid of the baby Eric. Once Eric tells Nicole the baby is none of her business, she will be visibly upset. At some point, this will lead to Eric punching E.J. before the night it out. E.J. seems to make the fight worse before he and Nicole start knocking back drinks together.

Days Of Our Lives Spoilers – E.J. Dimera And Nicole Walker Understand Each Other

E.J. and Nicole are far from a match made in Heaven. However, E.J. and Nicole have always understood each other. Now that Eric has most likely stormed off, E.J. and Nicole will bond while drowning their sorrows. Unfortunately, things could get very messy when Eric tries to make amends. Eric isn’t going to be too happy if he finds out that Nicole ended up in E.J.’s bed.

Can Eric get past Nicole cheating on him yet again? Will Eric decide to try to make things work with Jada instead?