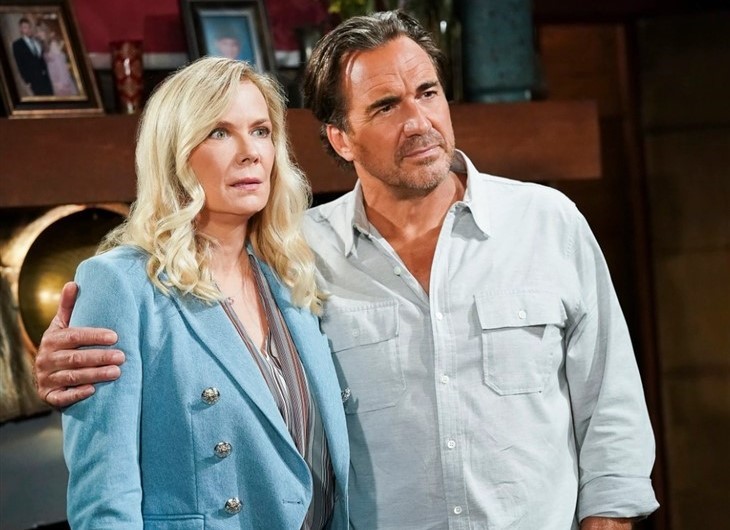 The Bold and the Beautiful spoilers document that Ridge Forrester (Thorsten Kaye) was so upset by the photo Hope Spencer (Annika Noelle) posted that he confided in Taylor Hayes (Krista Allen), and then passionate kissed her against the wondrous backdrop of the Mediterranean Sea.

B&B’s first location shoot in a handful of years was a major success. The images fans witnessed, with John Finn Finnegan (Tanner Novlan) and Steffy Forrester Finnegan’s (Jacqueline MacInnes Wood) realized reunion, was one for the digital vaults.

But some drama was injected into those special episodes, with the photo of Deacon Sharpe (Sean Kanan) standing behind Brooke Logan Forrester (Katherine Kelly Lang) being intentionally provocative.

Ridge had to bring the subject up. Brooke was uncertain if he had seen the photo and was preparing a response.

She handled the matter honestly and had nothing to be ashamed or embarrassed about. Brooke did not invite Deacon to the Forrester Creations’ executive suite, and immediate questioned his presence when he arrived.

Hope’s impulse photo take is reflective of the smartphone generation, which has widened to include many age groups. She did not think before posting that photo, which had no context. So, Ridge had to read into what those thousand words meant, with a wink toward the old-school saying about a picture’s worth.

Brooke responded honestly and has nothing to worry about on that front. Ridge tempered his words because he was the one hiding a secret.

Her commitment to marriage appeared to be shared by Ridge. But if he would so quickly kiss Taylor, is it reasonable to wonder how much of his heart she shares with Brooke?

Fans are awaiting the second soapy shoe to drop in this plot line, as Brooke seems likely to learn about the Mediterranean Sea kiss.

Deacon should have told Deputy Chief Bradley Baker (Dan Martin) that Sheila was hiding in the bathroom. Shielding that fugitive was a serious violation of his parole that can send him back to jail if ever proven.

Kanan’s character could have confided in Hope and possibly in Brooke. Deacon did not do so because he knows his actions were indefensible, and they both would have been furious with him.

It is fair to wonder which secret is pushed out of the daytime darkness first, Ridge’s kiss or Deacon’s shielding of Sheila?