Days Of Our Lives Spoilers: Allie And Chanel’s Passion ‘Feels Right’, So Why Lie? 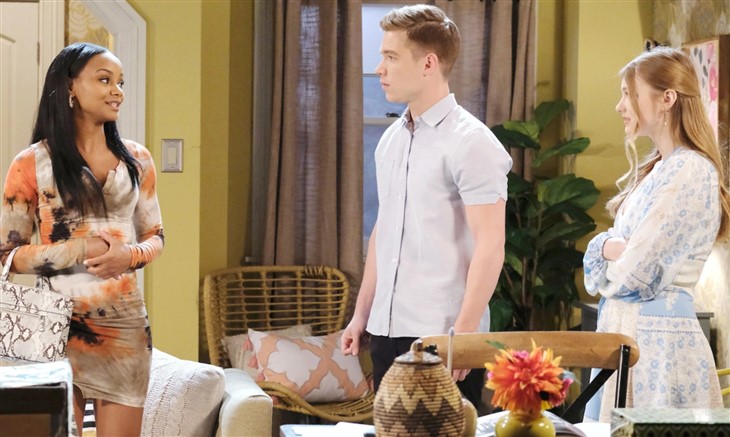 Days of Our Lives spoilers reveal that Allie Horton (Lindsay Arnold) will cheat on Tripp Johnson (Lucas Adams). Allie sleeps with Chanel Dupree (Raven Bowens) and lies to Tripp about it. Arnold said during an interview that being with Chanel “feels right” to Allie. If that is the case, then why does Allie lie about it? Why can’t she just follow her heart instead of playing games?

DOOL spoilers reveal that when Allie and Chanel reconnected in Salem, their relationship began changing. Although they partied with each other in London, it was just as friends. After their reunion, the two remained best friends, but Chanel kissed Allie.

Not having been with a woman before, Allie wasn’t sure what to make of the kiss. Sensing that Allie was caught off guard, Chanel played it off as no big deal. However, fans know that both young women had intense feelings for one another.

After a night of passionate kissing and cuddling, Chanel (and fans) thought the love triangle had been resolved. So, everyone was surprised when Allie suddenly took Tripp to bed afterward. Chanel was hurt when Allie chose Tripp, but the two ended up patching up their friendship.

After Johnny DiMera (Carson Boatman) publicly dumps Chanel, she runs off from the wedding reception. Allie is concerned about her friend and business partner, so she goes after her. Allie consoles a heartbroken Chanel and soon, the two are kissing. However, their interaction doesn’t stop at a kiss like last time.

Days of Our Lives Spoilers – Allie Horton’s Night Of Passion

Days of Our Lives spoilers for the week of January 10 reveal that Allie and Chanel sleep together. When they both wake up in the morning, there are decisions to make. While Chanel is single now, Allie is not. Allie is supposed to be in a committed relationship with Tripp. Then, the phone rings and it’s Tripp checking up on her. Allie doesn’t confess the truth and lies to her boyfriend about what she did the night before.

Arnold told Soap Opera Digest that Allie slept with Chanel because it felt right. If that is the case, then why lie to it? Why keep leading Tripp on if she’s more interested in Chanel? The actress explained,

“Allie is torn between the two of them and what they both represent. There’s that safe, stable life with Tripp that’s very secure. Then there’s Chanel, who’s very unpredictable and passionate, but maybe a little less safe. [Being with Chanel] is more dangerous and makes Allie look at parts of herself that she wouldn’t have to look at if she stayed with Tripp.”

However, with the devil still in Salem, could Allie’s secret come out in an unexpected way? Plus, how will Chanel feel about being kept hidden? Will that create a new conflict between the pair? Who do you think is right for Allie: Tripp or Chanel?

GH Spoilers: Spencer Believes That Trina And Cameron Are together!