Days Of Our Lives Spoilers: Xander Is Excited To Hear Abby Has A Lead On Sarah 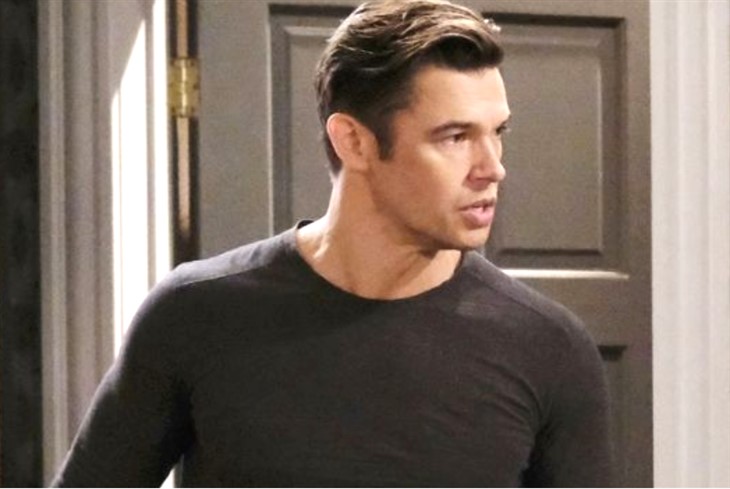 Days of Our Lives spoilers tease that Xander Kiriakis (Paul Telfer) will be excited to hear that Abigail DiMera (Marci Miller) has a lead on Sarah Horton’s (Linsey Godfrey) location in an upcoming episode of Days of Our Lives!

Days of Our Lives viewers will recall that Sarah has actually been missing for several months, and possibly close to a year, but it was only revealed recently when Rex Brady (Kyle Lowder) came to Salem for a family visit! Days of Our Lives viewers will remember that when Sarah got in the way of Kristen DiMera’s (Stacy Haiduk) plans, Kristen impersonated her, dumped Xander and claimed to run off with Rex! Kristen had Sarah imprisoned in the DiMera wine cellar and she’d drugged her with a syringe of the same thing that Abby herself had been drugged with by Gwen Rizchech (Emily O’Brien) several months before that! Then Kristen had stuffed the drugged Sarah into a steamer trunk and had her shipped to a Greek island, ostensibly owned by the DiMera family, while she faked texts from Sarah to Maggie Horton (Suzanne Rogers). She also covered up what she’d done by arranging for Rex to get an offer to work for Doctors Without Borders, in a remote area with little to no cell service.

DOOL Spoilers – Sarah Horton’s Phone Is Now Out Of Service

Days of Our Lives viewers will recall from a recent episode of Days of Our Lives, that when Xander talked to Maggie about what Rex had told him about Sarah, her phone was now out of service! That would not be terribly surprising, since Kristen had blackmailed Gwen and Ava Vitali (Tamara Braun) into helping her escape, having had secrets on both of them they didn’t want to come out. Kristen wanted to make sure to cover her tracks, and that meant making sure Sarah’s phone, which she had, was cut off so the signal couldn’t be traced since she’d been the one faking Sarah’s texts to Maggie. Xander had tried hiring Steve Johnson (Stephen Nichols) to find Sarah, but unfortunately he had just taken another case, which coincidentally was to find Kristen, and Abigail had jumped in with her investigative skills when she found out about Sarah!

Days Of Our Lives Spoilers – Xander Kiriakis Works With Abigail DiMera To Find Sarah Horton, And She’s Got A Lead!

Days of Our Lives viewers know that while under normal circumstances Abigail probably wouldn’t want much to do with Xander, he is a vital component of her missing persons case regarding Sarah. Sarah had disappeared on the night before he and she were have to gotten married, as Days of Our Lives viewers will recall, and so Abigail questioned him about everything he remembered the last time he saw her. Xander is quite willing to follow up on any lead Abigail might get himself, as a young mother of two small children shouldn’t attempt a rescue mission of Sarah alone and the Salem PD is overburdened. Besides, she may be overseas and out of their jurisdiction, and John Black (Drake Hogestyn) needs to keep an eye on his wife Marlena Evans (Deidre Hall) and cannot go look. Xander is thrilled to find out Abigail has a lead, and offers his muscle to bring Sarah home!