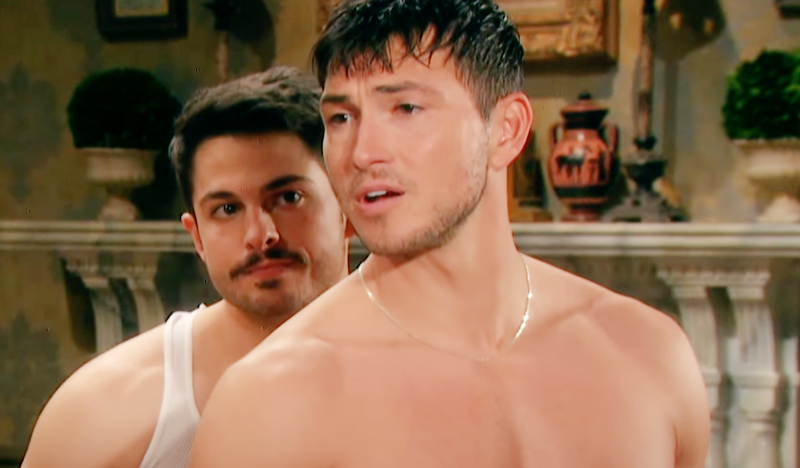 Days of Our Lives spoilers reveal that fans will meet Alexander “Alex” Kiriakis (Robert Scott Wilson). Alex left the foundation in Phoenix after some business conflict with his brothers. While Sonny Kiriakis (Zach Tinker) is happy to see Alex, the newest Salemite will start some controversy. Find out what the actor had to say about Alex’s personality and plan.

DOOL spoilers reveal that Ben Weston (Robert Scott Wilson) is no longer in Salem. While Ben is sailing the sea with Ciara Brady Weston (Victoria Konefal) and their baby, the actor is popping up in Salem with a different name.

Fans already know that Alex will surprise Sonny by showing up at the Kiriakis mansion. While fans will immediately recognize Alex as “the old Ben,” they are trying to change up the character’s look just a bit. Speaking to Soap Opera Digest, Wilson explained that Alex’s hair is styled differently, and wears glasses. Plus, his personality and clothing choices are completely different.

Wilson didn’t say too much about the character. What the actor did share is that Alex is a vibrant playboy. Alex is also a successful businessman but left Phoenix after a dispute with his brothers. So, Sonny might learn more about what made Alex quit the foundation and come back to Salem.

Days of Our Lives spoilers reveal that Alex is thinking about just taking the summer off. However, he soon comes up with another idea. Alex suggests to Sonny that he hire him at Titan Industries. Alex thinks it would be great to work together again. Wilson also told the magazine,

“He’s making his impression felt… He’s liking Salem more and more and the idea of helping the family business… He wants to work together like old times; the Kiriakis brothers taking over the town, that type of thing.”

As for how fans will receive Wilson playing a non-serial killer, the actor said some backlash is expected. However, he has high hopes and is really excited about this new character.

“Listen, we’re not trying to pull the wool over anybody’s eyes. Everybody knows who I am. It’s not like there were two months or three months [in between]. I understand there’s going to be some backlash. It is what it is. But between our head writer and our producers, everybody has been on board with it. Everybody’s excited. But with that being said, we had to change him up a little bit.”

What do you think is going to be Alex’s backstory? Will Alex and Sonny continue to get along, or could there be tension between the brothers? Share your thoughts and remember to keep watching the NBC soap to see what happens next.