Since she starred in season 2 of 90 Day Fiancé: Before the 90 Days with Michael Ilesanmi, Angela Deem has been totally transformed. What with weight-loss surgery, boob reduction, teeth and more, it seems the famous mee-maw will never stop. However, while she is looking so good these days, she couldn’t resist one more touch.

In a TikTok video shared on Instagram, Angela Deem has revealed her latest beauty treatment in the form of a new Monroe piercing. Now she is rocking jewelry on her face, some fans are complimentary, while other followers slammed her.

The video, shared on Instagram on July 21, had the caption, “I did it” plus the hashtag #Queenslovealljewelry. Backed by the “Girl don’t do it” clip, the TLC reality star initially shows one side of her face, then turns her head to reveal the new Monroe piercing on her upper lip. 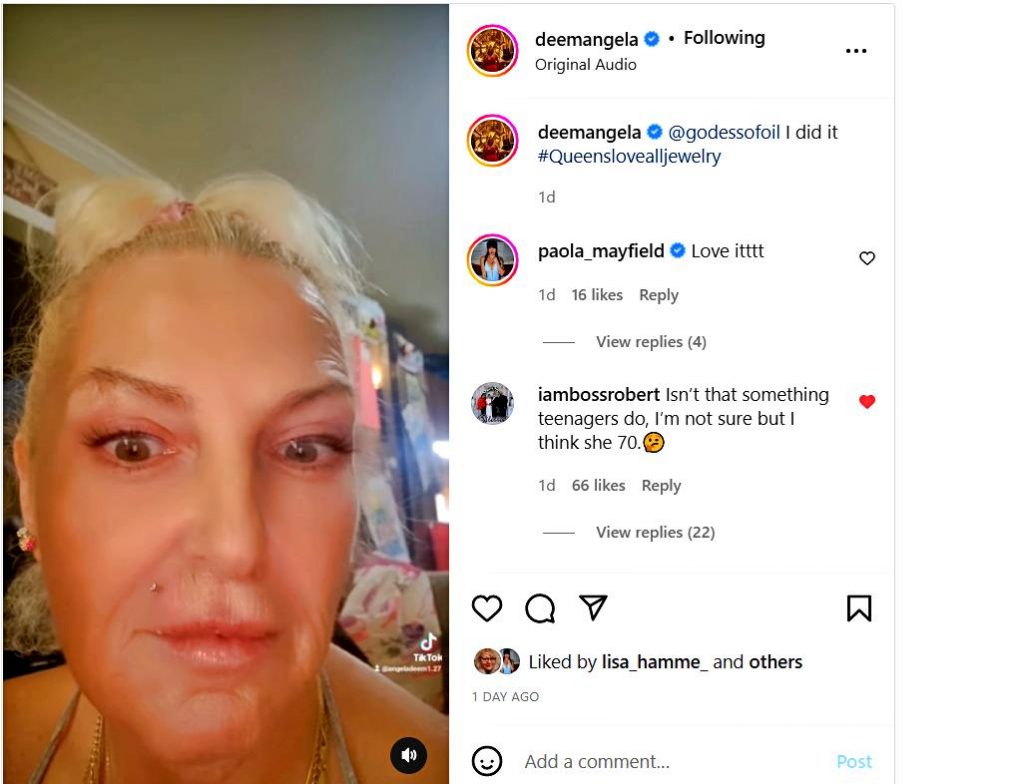 Fellow 90 Day Fiancé star Paola Mayfield was quick to approve the new touch, writing, “Love itttt.” Another follower commented, “I love it. Your [sic] only as old as you feel. Enjoy life and have fun.”  Other followers posted flame emojis to let Angela know she looks hot.

However, with social media being what it is, keyboard warriors were also quick to comment. One wrote, “This look is well outdated,” while another quipped, “This screamssss mid life crisis.” Another follower wrote, “Dang u look older since u lost weight,” while another commented, “Omg that wrinkle neck is ewwww! Quit smoking ! Prob to late to save ur skin!” Yet another wrote, “Isn’t that something teenagers do, I’m not sure but I think she 70.”

However, another follower, after noting the hate, commented positively. They wrote, “Hey Guryfriend, [sic] damn people are haters. Check out my post on Facebook!! I got your back girl! You do you!”

In a more recent video, Angela mimes a South African woman’s voice, saying, “To those who think they have me all figured out, I hope you like surprises.”

Angela’s altercation with a flight attendant

Angela’s new piercing comes shortly after she apparently got into a verbal altercation with a flight attendant. In a video uploaded to Reddit, Angela can be heard yelling at the Delta Airlines employee. She yells, “You are not gonna [sic] talk to me like this cause you’re not the law enforcement,” adding,

Get [who] you need to get, cause you’re starting some s**t.

At first, we only see her back and it isn’t clear that it is Angela, but when she turns to speak to a fellow passenger, we can see it is, indeed, the TLC reality star. At that stage, she asks the passenger if he had seen her bag around.

Angela vs flight attendant from 90DayFiance

Meanwhile, it is unclear if her relationship with Michael Ilesanmi is on or over. He had trouble getting a K-1 visa to move to the States. Since then, Michael has deleted his social media, while Angela has taken his name off her Instagram account.