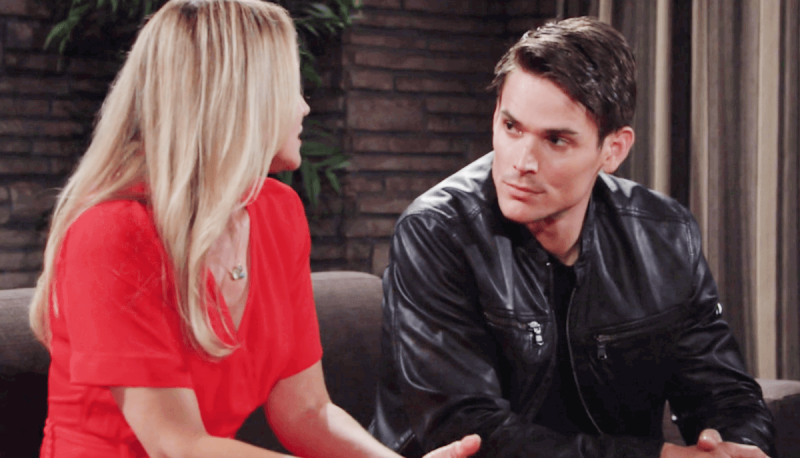 The Young and the Restless (Y&R) spoilers tease that Shadam fans have not stopped hoping that Sharon Rosales (Sharon Case) and Adam Newman (Mark Grossman) find their way back to each other. That doesn’t look likely these days, what with Adam pining for Sally Spectra (Courtney Hope)—dumping her sure is a funny way to show it!

In an ironic twist, will it be Sharon who urges Adam to rethink his decision?

The Young and the Restless spoilers: Are Shadam Done?

Explosive show spoilers reveal that during the week of July 25-29, Sharon and Adam will have a moment together, but it’s not what you might think! Instead, Sharon sees that her ex is miserable and she tries to help a guy out. It would be hard to find a woman who understands the black sheep better than Sharon so she may figure out his ruse and call him on it.

Will she figure out that Adam employed his breakup strategy with Sally just so that she could keep her job at NE?
Adam at one time would have done anything to win back the blonde temptress but that was until Sally entered his orbit. Sharon understands how important the redhead is to him so don’t be surprised if she noses into his business.

Y&R spoilers: Shadam Were Once a Thing

Adam tries to BS Sharon about Sally being a liability, telling her that she cost him his father Victor Newman’s (Eric Braeden) respect. But will Adam finally break down and tell someone the real reason he cut ties with Sally?
Sharon is one of a few people who will see that Sally was good for Adam and could be the one to point her back in his direction.

The Young and the Restless spoilers: What Happens Next in Genoa City, Wisconsin?

Sharon just lost her husband Rey Rosales (Jordi Vilasuso) so she knows life is short and can be ripped away at any moment. Will Sharon convince Adam not to waste his moments with Sally? Whatever the case, Sharon will lend an ear and offer some good advice, so will she steer Adam in the right direction?

Explosive show spoilers tease that Sharon will have a big impact on Adam soon and it could mean a reunion with Sally Spectra! But in the meantime will Sally get the wrong idea and become jealous?