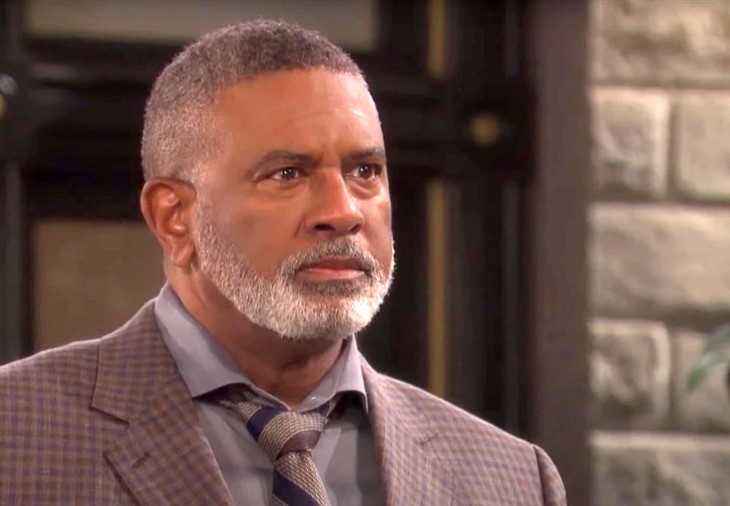 Days of our Lives (DOOL) spoilers tease that TR Coates (William Christian) is just as much of a bad, bad man as he always was. Explosive show spoilers reveal that he shoots Eli Grant (Lamon Archey), his son-in-law, then tries to cover it up. Will he end up killing his SIL and any chance he has of reconciling with his daughter Lani Price (Sal Stowers)?

Days Of Our Lives Spoilers – TR Coates Is A Bad Guy

According to Christian, his character is a master manipulator. But he may have met his match in Eli, a cop who confronts him while he is buying heroin. Christian told Soap Opera Digest that he doesn’t handle the situation well, and that would be an understatement. In the end TR grabs Eli’s gun and shoots him!

“TR’s been in jail before. So he’s got a lot to lose.” After Eli drops to the ground, TR panics and goes through a series of crazy maneuvers to cover his tracks.

TR gets his drug dealer back on the scene, somehow injects him with a lethal overdose, then puts the gun in his hand. According to Christian he is smart enough to know that he may have to do more deceitful actions in the future but for now his evil deed is, “taken care of at that moment. He thinks he’s covered his tracks.”

But there is a wild card in the picture and that is his ex, Beth. Beth knows all about TR’s real self and has spilled the beans to Eli. TR tries to convince her to keep quiet now about his drug habit and past abuse of her. At the same time Lani and her partner are sent out to the park to investigate the shooting.

Days of our Lives Spoilers – What Happens Next In Salem?

Eli is rushed to the hospital where his loved ones gather to pray and keep vigil. Lani thinks this is all a result of a drug deal gone bad and she has no idea of the part played by her dad TR. TR has the nerve to show up alongside Paulina Price (Jackee Harry) and Julie Williams (Susan Seaforth Hayes), “pretending to be concerned.” How long can his con continue, and will Eli survive to point the finger at his shooter?