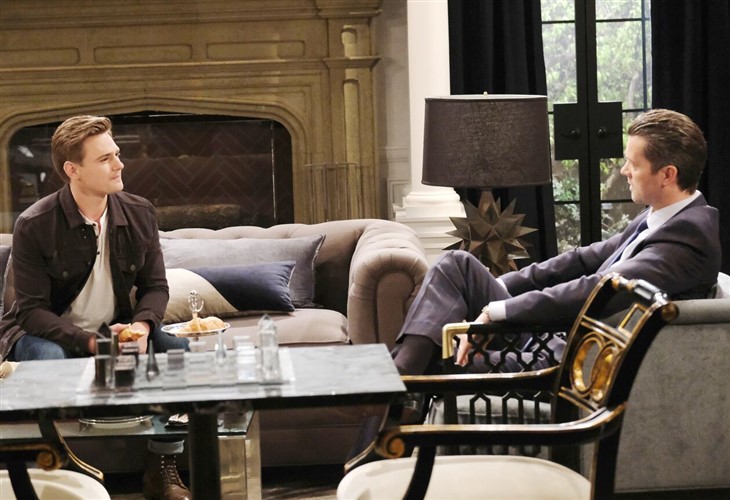 Days of Our Lives (DOOL) spoilers for Monday, August 15, 2022, reveal the DiMera clan members trying to do their best to remain rich and all-powerful while juggling complicated love lives.

Days Of Our Lives Spoilers – Machinations In The DiMera Mansion

With new family member Ava Vitali (Tamara Braun) living with them as the poor widowed grieving woman who spent five minutes married to Jake DiMera (Brandon Barash) before he died, EJ DiMera (Daniel Feuerriegel) and Johnny DiMera (Carson Boatman) try to play nice. In fact, they sit down together to have a cordial dinner that turns out to be anything but cordial.

In another part of this now-overcrowded mansion, Anna DiMera is looking at Kristen DiMera (Stacy Haiduk) funny. She knows this woman is up to something but what? That’s the million-dollar question (literally) and Anna decides she is going to find out what’s going on. Kristen doesn’t know Anna very well so she doesn’t really even know who and what she is dealing with.

Then there are the DiMera adjacent — Gabi Hernandez (Camila Banus) and Li Shin (Remington Hoffman). Li is a bit unnerved when Gabi brings up Stefan O. DiMera (also Brandon Barash) and claims that he was the true love of her life. With Li keeping Stefan’s status from Gabi and delaying his awakening, this might cause him to delay it even more because Li is bound to become obsessed with Gabi and won’t want her with anyone else.

DOOL Spoilers – Quite A Dating Combination

Like other young men who have come to Salem in recent times, Alex Kiriakis (Robert Scott Wilson) took an immediate liking to Chanel Dupree (Revan Bowens). She just seems to have that effect on people. Chanel didn’t quite know what to make of Alex, but he is certainly nice-looking and intriguing. But she already rejected one man recently and decided to be with Allie Horton (Lindsay Arnold). After all, they are going to start working together so they better start getting along.

Well, on Monday, Alex, Allie, and Chanel go on an odd date that is bound to have some awkward moments as the three of them get to know one another. Why would Chanel even suggest such a thing and what will Alex suggest before the date ends? Stay tuned to Days of Our Lives weekdays to see how these stories play out.