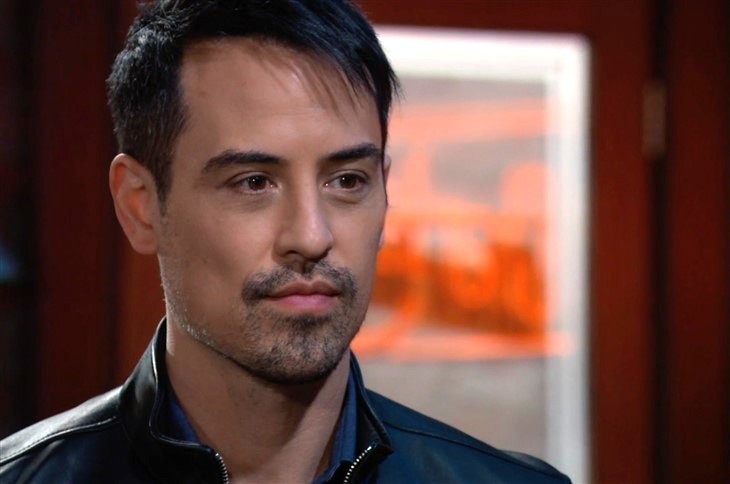 General Hospital (GH) spoilers and updates for Monday, August 15 tease there will be burdens, betrayals and bombshells. Some Port Charles residents will be burdened as they await outcomes, some may feel betrayed, and some bombshells will be exposed to others – read on to see what to expect.

At Wyndemere, Nikolas Cassadine (Marcus Coloma) is burdened with trying to keep the secret of Esmé Prince’s (Avery Kristen Pohl) presumed death from his great uncle, Victor Cassadine (Charles Shaughnessy). Victor tells Nikolas he knows he’s hiding something, following a previous conversation they had about how to best help Spencer Cassadine (Nicholas Chavez) after his arrest. Viewers will remember he revealed he’d broken out of Spring Ridge and was with Trina Robinson (Tabyana Ali) at the Port Charles Cemetery.

Now, Spencer will spend time at Pentonville Prison after turning down a deal for shorter time at Spring Ridge after violating his parole and probation. Victor wants to hunt down Esmé and Nikolas considers revealing the truth that Esmé may be dead, not just having left town.

GH Spoilers – There Is Another Reason

Josslyn Jacks (Eden McCoy) reveals to Cameron Webber (William Lipton) there is another reason why Dex Heller (Evan Hofer) is interested in Trina’s trial. Josslyn knows that Sonny Corinthos (Maurice Benard) is also trying to help Trina and that Dex is his new enforcer. Josslyn had felt rather betrayed by Cameron when he revealed to her that Spencer had been faking things with Esmé and he knew it, but had been sworn to secrecy. Of course, she doesn’t know that Ava Cassadine (Maura West) had previously sought Sonny’s help with exonerating Trina; nor does she know that he’s a plant. Michael Corinthos (Chad Duell) has made sure of that, not revealing his business with Dex even to her.

At Dr. Terry Randolph’s (Cassandra James) office, Dr. Hamilton Finn (Michael Easton) lays a bombshell on Elizabeth Baldwin’s (Rebecca Herbst) childhood friend when he tells Terry what he found out. Finn has realized after discovering Elizabeth on the staircase that her issues stem from much more than just sleeping pills, and she appears to have been triggered on the stairs. It was the same staircase where he threw Peter August (Wes Ramsey) down the flight of stairs and they thought he was dead.

It may indeed be the Peter August incident that really started Elizabeth’s problems, which apparently also relate to her reasons for distancing her parents. Finn may ask Terry, who has known Elizabeth since childhood, if she recalls anything Elizabeth may have told her when they were children.

GH Spoilers – Do Not Go Inside

In front of the General Hospital elevator where Port Charles Police Commissioner Jordan Ashford (Tanisha Harper) pushed the stop button, Jordan orders someone not to go inside. Curtis Ashford (Donnell Turner) stands beside her and it may be a returning Officer Rory Cabrera (Michael Blake Kruse) who she’s talking to, about Oz Haggerty’s (Max Faugno) ICU room. Rory, along with another officer, had rushed to free an elevator passenger and Curtis may have stepped in front of the ICU to stand guard. Meanwhile, inside, Dr. Portia Robinson (Brook Kerr) had given Oz injections to bring him out of his coma.

Also at GH, Trina has received a phone call advising her the jury has reached a verdict in her trial. Trina anxiously awaits her fate as she shows obvious fears about the jury decision, possibly also talking to Rory. Jordan had an attack of conscience when she created the distraction that allowed Portia to try and bring Oz quickly out of his coma.

Now they all wait to see if Trina has been found guilty or innocent, and if Oz has indeed woken up and can exonerate her. There of course, was a chance that Portia’s efforts caused more harm than good.

GH Spoilers – Can You Hear Me?

In Oz’s ICU room, a worried Portia asks Oz if she can hear her – she knows she was taking a chance that he may not be able to respond. If he was brought out of his medically induced coma too soon or too suddenly, he could even die. If he is able to even squeeze her finger it will be a good sign that he understands speech and can respond by touch. Still, the jury has already reached their verdict, unbeknownst to Portia. Her baby girl may have to spend a little time behind bars for Oz to be useful on appeal.