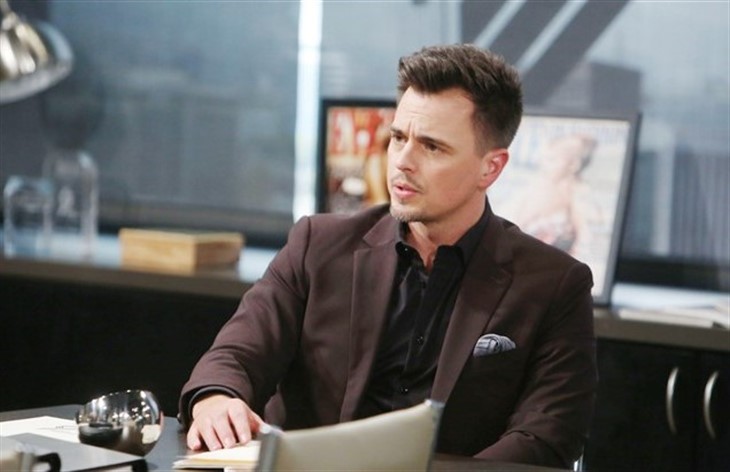 The Bold And The Beautiful Spoilers indicate that Darin Brooks is back on the set as Wyatt Spencer. Where has Wyatt been all of this time? What adventures await now that he’s returned.

The Bold And The Beautiful Spoilers – Wyatt Spencer Is Back

The Bold And The Beautiful’s Wyatt will be back on our screens Tuesday, May 17, and Wednesday, May 18 this week. Bill Spencer (Don Diamont) will call both Wyatt and Liam Spencer (Scott Clifton) for a discussion about Ridge Forrester (Thorsten Kaye) and his recent treatment of Brooke Logan (Katherine Kelly Lang). Brooke’s daughter Hope Spencer (Annika Noelle) will be privy to this conversation as well. Has Bill set his sights on Brooke now that Ridge had neglected her for months? Perhaps Bill believes that Ridge’s feelings for Brooke have changed now that Taylor Hayes (Krista Allen) is back in town. Has Ridge moved on from Brooke leaving her open for another man to steal her away? Does Ridge deserve to have Brooke’s love after nearly shacking up with Taylor?

B&B Spoilers – Will Fans Get An Update On Flo Logan?

When The Bold and The Beautiful’s Flo Logan (Katrina Bowden) was last seen, she and Wyatt were engaged and looking forward to eventually planning their wedding. However, Flo has been missing in action for some time as well. Will Flo return with Wyatt? Have Wyatt and Flo called it quits while the couple has been off-screen? Flo could have been in town supporting both Brooke and Hope through recent drama but she’s been nowhere to be seen. When will Flo return?

The Bold And The Beautiful Spoilers – Where Has Darin Brooks Been?

While The Bold and The Beautiful’s Wyatt has been out of sight, he has certainly not been out of mind. Meanwhile, while not onscreen, Darin has been working on other projects. Brooks has been busy taping his Apple TV+ series “Amber Brown” which debuts on July 29. “Amber Brown” is based on a series of books by Paula Danziger by the same name. “Its plot revolves around the efforts of the titular character (played by Carsyn Rose, whom you might recognize from The Rookie) to find her voice following her parents’ breakup. Grey’s Anatomy vet Sarah Drew (ex-April) plays Amber’s mother; Brooks, Mom’s boyfriend.”

Brooks announced this series last September and is thrilled to be working with such a talented cast. Brooks feels that fans of The Bold and The Beautiful will like the series as well. Brookes invites everyone to check out the series and promises to keep fans informed with updates. Presently, there is no word if Brooks is back on set full time or not yet.