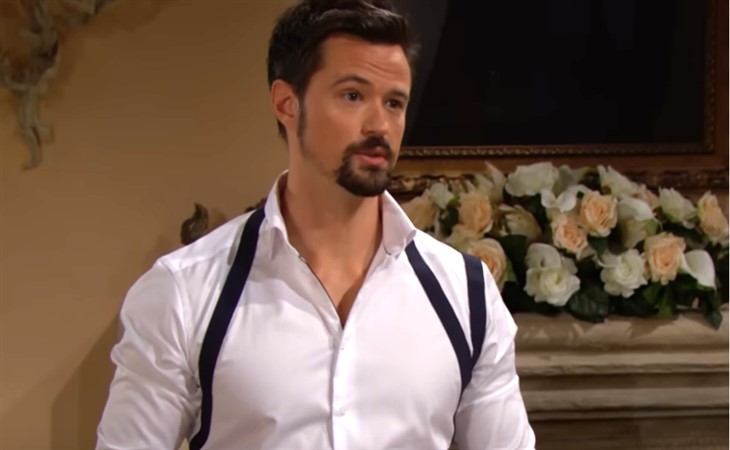 The Bold and the Beautiful Spoilers reveal Ridge Forrester (Thorsten Kaye) being so enraged by his son, Thomas Forrester’s (Matthew Atkinson) betrayal that he wants to destroy his life and disown him as well. He threatened his job at Forrester Creations and the pain Ride is feeling is beyond measurable. Will Thomas ever be able to redeem himself and make right in his fathers eyes?

B&B Spoilers reveal Thomas may have already destroyed his mother, Dr. Taylor Hayes’ (Krista Allen) wedding day, shattered his father’s heart, and everyone has figured out how unstable he really is. I know that Taylor is upset and hurt by his actions but she also knows he needs intense psychological help. What he did was for her and I know that even when they make really bad mistakes a mother’s love is unconditional so she will forgive him more easily than other members of the Forresters.

The confrontation between Thomas and his sister, Steffy Forrester-Finnegan (Jacqueline MacInnes Wood) is coming to a head and I know that as fiercely loyal and protective she is with her family, I am not sure if she is going to forgive him that easily especially since he threatened Douglas Forrester (Henry Joseph Samiri). I am really impressed with how much Steffy’s character has matured over the years. Standing up for Douglas and exposing Thomas was the best thing she could have done for everyone involved.

I don’t know if Ridge would ever be willing to forgive him. What he did was evil and backed his dad up against a wall. Ridge knows that whatever he decides to do it will destroy the other person and he should have never been put into this situation. I think it also proves what we already know. Taylor will always be Ridge’s “Safety” pick because unlike the fiery soul of Brooke Logan (Katherine Kelly Lang) she is a lot more subdued.

Bold and the Beautiful Spoilers reveal Deacon Sharpe (Sean Kanan) and Sheila Carter (Kimberlin Brown) bickering as usual. He let her know that he has every intention of comforting Brooke even though Sheila clearly has feelings for him. I think personally that was a bad decision. Sheila herself said that Brooke’s misery essentially brings joy and life to her so, maybe Deacon couldn’t have just blurted that out. Being locked up in the apartment 24/7 is beginning to wind her up and I am sure pretty soon she will break Deacon’s rules and go back out into public. I could very easily see her jealousy getting the best of her and start to stalk Brooke.

Depending on how far she decides to take it, I could see Sheila kidnapping Brooke and holding her hostage just so she can keep Deacon to herself. Now, if this is Sheila’s next scheme this is where I can see Thomas trying to redeem himself. If Brooke goes missing, he can act like he doesn’t care or be happy about it but trying to get back on his family’s good side may be the key to his redemption.

If he were to somehow figure out that Sheila was still alive and figure out where her and Brooke are, this would definitely be a step in the right direction. If he would actually choose to save Brooke and not team up with Sheila at least. If he brought to light that Sheila was still alive and exposed her for the psycho she is, I think that could open the path to complete forgiveness.

Ridge would be grateful that he saved Brooke and Taylor, Steffy, and Finn would be in shock but knowing she is locked up again will help them. Brooke would be thankful he saved her. I don’t think they will ever have a stable relationship but if he shows her an act of mercy then maybe she could be open to him being able to change. What do you think Thomas could do to redeem himself?