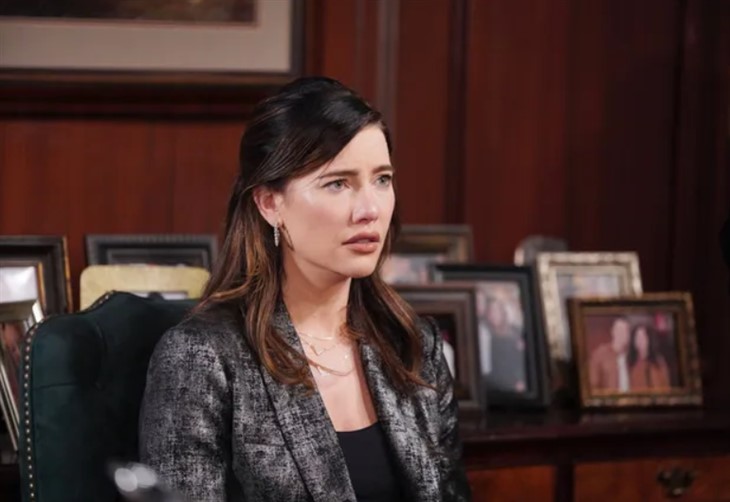 The Bold and The Beautiful spoilers and updates tease that Steffy Forrester Finnegan (Jacqueline Macinnes Wood) will come up with the perfect revenge. Thomas Forrester (Matthew Atkinson) needs to be taught a lesson, and she’ll make sure he learns it – by turning Thomas into Child Protective Services herself.

The Bold And The Beautiful Spoilers – Fraudulent Call

Steffy has thought twice about whether Douglas Forrester (Henry Joseph Samiri) is really as safe with his father as she thought he was, but he passed when the CPS agents came. But whether Thomas could ever be abusive to Douglas again like he previously was is a big question; there was a time when he showed monsters in Douglas’ room. These were holograms and Douglas was just a tot, and he had nightmares-Douglas was definitely in danger back then, but one thing is sure-Thomas committed fraud.

She considers trying to get custody of her nephew after discussing it with her husband, but then she’d have to tangle with Hope Logan (Annika Noelle) and isn’t sure she wants to. She wishes she’d stepped up when Douglas was seeing monsters, but didn’t, but she can turn Thomas into CPS for the fraudulent call.

B & B Spoilers – A Well Deserved Lesson

According to The Bold and the Beautiful spoilers, Steffy never thought she’d find herself on the side of any of the Logans, but this was just plain wrong even if it was Brooke Thomas impersonated. He explained his motivations well enough when they and their mother argued before the wedding, but both Taylor and Steffy were upset, because of the manipulation of Ridge. Now Ridge is upset with Taylor for not telling him before they went before Carter Walton (Lawrence Saint-Victor) and so is Steffy and he’s trying to make amends with Brooke. Everyone is hurt and upset with each other and the Forrester family is chaos-Thomas has to pay, and Steffy is going to make him pay!

The Bold And The Beautiful Spoilers – An Investigation Starts

California Penal Code states per § 11172(a), a person can incur civil or criminal liability if it can be proven a false report was made and the person knew it. It has to be provable both that the caller knew it was false and made with reckless disregard of the truth. All Steffy has to do is bring in Douglas’ phone, which is okay with him, and play the recordings, and allow the files to be copied into evidence.

There’s a little play within the wording of the statute as to what exactly the falsity is, whether the person is framing someone or making a false report of abuse. An investigation starts and Thomas will very soon be receiving some unpleasant questions and some unwanted visitors.