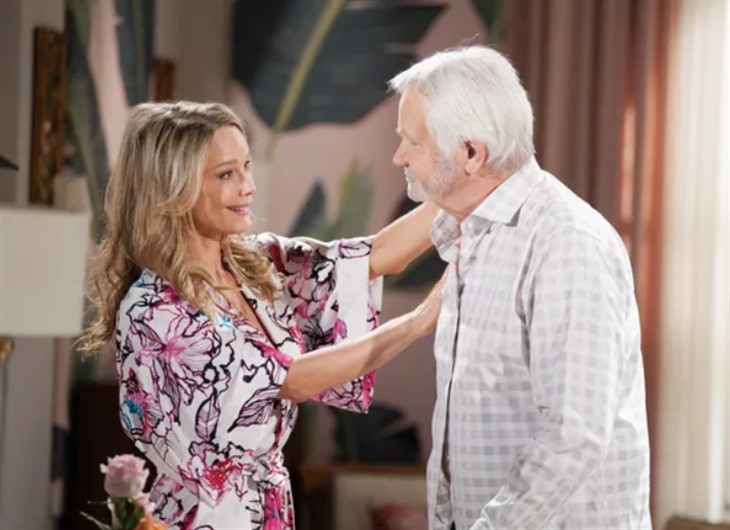 The Bold and the Beautiful (B&B) spoilers document that Eric Forrester (John McCook) told Donna Logan (Jennifer Gareis) that he is in love with her, not Quinn Fuller (Rena Sofer). It is a shame that he did not come to that realization before being caught by his wife and daughter, Bridget Forrester (Ashley Jones).

Eric and Quinn care about each other and were in love for years. While their marriage was adamantly opposed by many loved ones, they were arguably better off having coupled with each other.

However, it has been quite clear for months that something was off. The first sign came when Eric did not share his ED diagnosis with Quinn.

Donna is a very sweet person. She also remained in love with Eric long after they were no longer married.

Gareis’ character did not turn away from the man she refers to as her honey bear even after he gave into Quinn’s two demands. Devoted viewers likely recall that Quinn decided Eric could no longer have any personal contact with Donna at work and had to fire her.

But the absence of Donna made Eric’s heart grow fonder of her. Meanwhile, Quinn could not get Carter Walton (Lawrence Saint-Victor) out of her mind.

B&B Spoilers – Sometimes The End Of The Road Is Reached

Some marriages run their course. That does not take away from good times that were shared and, in this instance, has the potential to end amicably.

Hopefully, Eric’s understanding of Quinn’s feelings allows her to recognize her husband’s perspective. If Eric no longer is in love with Quinn, then why stay with him? Plus, Quinn has fallen in love with Carter.

The Bold And The Beautiful Spoilers – A Double Ceremony Performed By Charlie Webber?

Carter could not serve as the officiant at his intended wedding to Paris. So, he asked Charlie Webber (Dick Christie) to handle that responsibility, and he was happy to oblige.

A double ceremony would be fitting soap. Imagine the image of Quinn and Carter standing aside from Eric and Donna. Yes, that would be memorable.

But writing those four characters from where they are to completed nuptials can not be that simple and likely will not involve the suggested double ceremony. As to which could marries first, that is a good question.

It would seem that the new couples could marry at any time following Eric and Quinn’s divorce. But will Eric want to switch wedding rings, and will Quinn convince Carter that he should leave Paris Buckingham (Diamond White) behind?