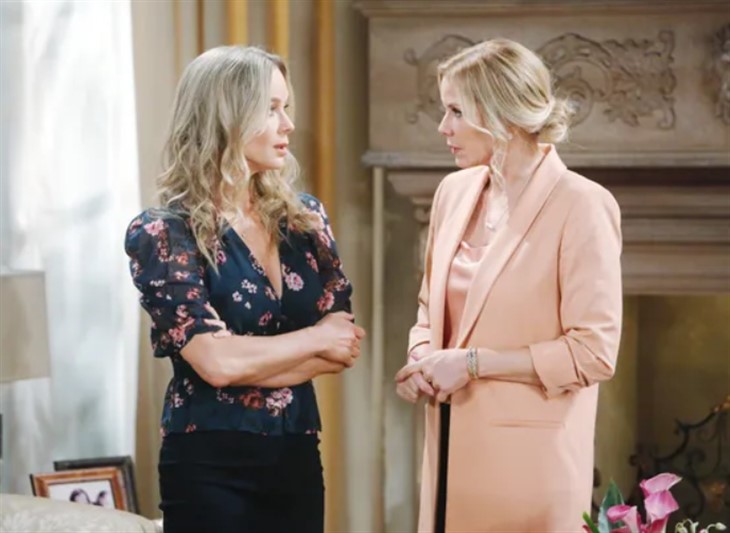 Apparently the good news from the middle Logan sister is news to Brooke because she didn’t hear it from Eric or Bridget Forrester (Ashley Jones). She did know of course that for some reason Carter Walton’s (Lawrence Saint-Victor) wedding was crashed by Quinn and it didn’t happen, but it was for the best! Brooke didn’t think he should marry Paris Buckingham (Diamond White) either; but she had assumed Quinn was cheating on Eric with Carter again, not that Eric was cheating with Donna!

Brooke is on Zende Dominguez’ (Delon de Metz) side and doesn’t like that Paris dumped him for Carter and from what she hears, it was Paris’ idea to seduce Carter! Brooke knew Paris was trouble with a capital T from the first time she laid eyes on her!

B&B Spoilers – Brooke Forrester Is Happy For Her Sister – And For Eric Forrester!

For Brooke’s part, she is happy for Donna and even more happy for Eric; Eric was never happier than he was when he was married to Donna. That’s a lot for Brooke to admit who has stolen her sisters’ men over the years, but then Eric was her stepping stone to Ridge Forrester (Thorsten Kaye) anyway. She is just glad that the horrible Quinn is away from Eric and he’s finally gotten some sense into his head; but she is worried about Carter! As for Donna, Brooke hopes to see a ring on her finger soon, although the divorce has to be finalized first of course!  Brooke wonders how quickly Quinn’s portrait will come down from where it does not belong and is burned this time so no one ever has to look at it again!

The Bold And The Beautiful Spoilers – Does She Think They’ll Get Married Again?

Brooke wants to feel things out between Donna and Eric and asks her if she thinks they’ll get married again, has Eric said anything to her yet about that!? She acknowledges it may be a little early in the game to be asking about wedding plans but she’s trying to make sure if Eric is serious. Donna tells Brooke what Eric told her – he had told her he loves her too much to let her go and was going to tell Quinn he wanted a divorce.

When Brooke asks if she knows if he has asked her yet she tells her how they were discovered in bed together by Quinn and Bridget! Brooke isn’t super surprised that Bridget hadn’t told her anything.

Brooke is excited and happy for Donna and wants to start helping plan a wedding but it will be a little while yet before that can happen. They can’t get married before Eric’s divorce is final and even in California that takes a certain amount of time of being separated. Quinn has yet to move out of the Forrester mansion and as far as Brooke is concerned, she’ll be glad to throw all of Quinn’s stuff out in the street! But she knows Eric won’t do it like that and she’ll probably move in with Wyatt Spencer (Darin Brooks) and Flo Logan (Katrina Bowden) and they won’t like that!