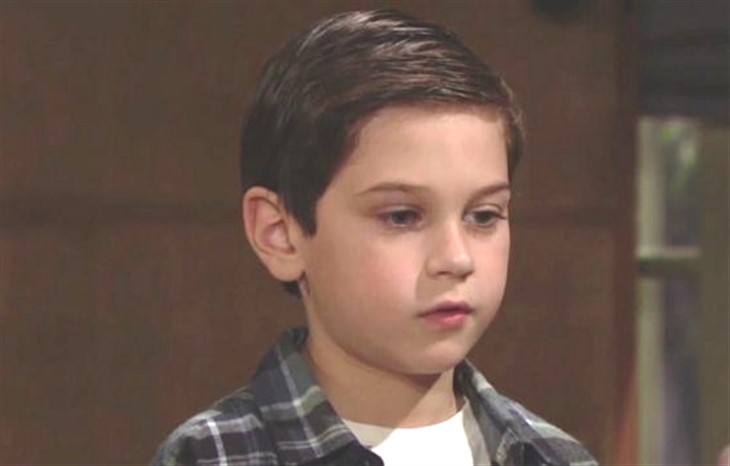 The Bold and the Beautiful (B&B) spoilers for Thursday, January 27, 2022, reveal Douglas trembling under the weight of the secret Brooke insists that he keep.

Although Douglas (Henry Joseph Samiri) managed to get the words out and tell Steffy (Jacqueline MacInnes Wood), Thomas (Matthew Atkinson), and Ridge Forrester (Thorsten Kaye) that he saw Grandma Brooke (Katherine Kelly Lang) kissing Santa, they weren’t sure what he was talking about and thought he was quoting various fun Christmas songs.

As they tried to get to the bottom of things, a panicked Hope Logan Spencer (Annika Noelle) called and demanded that Thomas bring Douglas home. Steffy was not happy when Thomas gave into the demands of the woman who essentially kidnapped Thomas’ son and claimed her as her own.

Once there, Brooke sweetly and nervously asked Douglas if he can maybe cool it with the Grandma kissing Santa thing because clearly, he misunderstood what he saw. But Douglas knows what he saw and it’s very hard for him not to talk about it because it’s a pretty big deal when your fake grandmother kisses the man in the red and white suit who brings you presents.

Now that Hope knows what happened between Brooke and Deacon Sharpe (Sean Kanan) on New Year’s Eve, the fact that he has been staying away from her and her mother makes much more sense, but this is not what Hope wants. She waited years to have her father in her life and she is not about to give it up now.

Hope and Deacon talk about what happened on New Year’s Eve as Sheila Carter (Kimberlin Brown) looks on and listens in. And she is thrilled. Her little trick with the champagne worked and Brooke did a big oops. Since she is bound and determined to ruin Brooke’s life, this makes Sheila positively gleeful as she plans her next step. And Brooke thought Douglas was the bulk of her problems. She has no idea what Sheila is up to, but Taylor Hayes (Krista Allen) just might… Stay tuned to The Bold and the Beautiful weekdays to see how these stories play out.