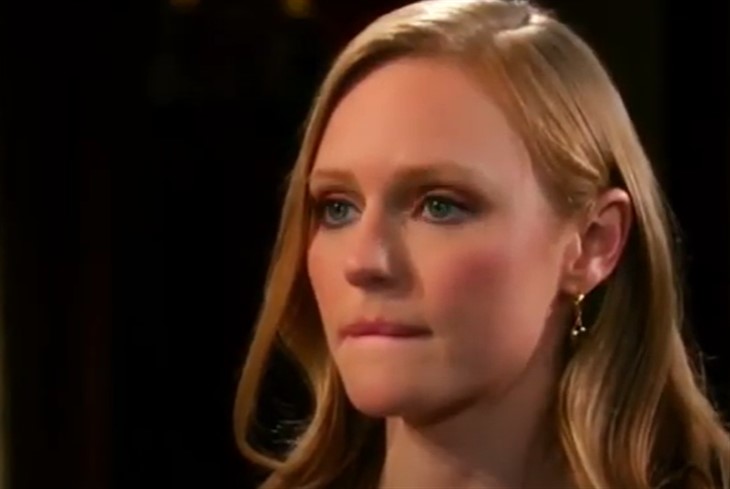 Days of Our Lives (DOOL) spoilers for Friday, January 28, 2022, reveal Chloe catching Craig in a compromising moment and demanding to know what’s really going on.

Sometimes having that innate reporter’s instinct just like her parents is not always a good thing. Abigail DiMera (Marci Miller) knew damn well she wasn’t really looking at Sarah Horton (Linsey Godfrey), so having lived in Salem long enough, she knew a Dr. Rolf (Will Utay) mask had to be at work. But she never guessed what was really going on and how many people were involved with this mess.

Now, Abigail finds herself away from her family and stuck on an island and she thinks she got there via Ava Vitali (Tamara Braun). Imagine her shock when she wakes up and realizes she is really Kristen DiMera’s (Stacy Haiduk) hostage and she has some company in that department in the form of the real Sarah Horton, who has been lingering there for nearly a year.

DOOL Spoilers – The Verdict Is In

Back in Salem, EJ DiMera’s (Daniel Feuerriegel) life is on the line. Will he spend it as a free man or go to jail? That’s the ultimate question as he and Belle (Martha Madison)head into court to see what the judge decides. Will he pay for a crime that Lucas (Bryan R. Dattilo) committed or will he be acquitted? If the devil has anything to say about this one, it looks like EJ is in some huge trouble.

It’s bad enough that MarDevil (Deidre Hall) revealed the truth about who Lani Grant’s (Sal Stowers) real parents were on Paulina Price’s (Jackee Harry) wedding day. She never wanted Abe Carver (James Reynolds) to learn the truth and definitely wanted to marry him, but it was not to be because the truth did indeed come out.

Now, Lani’s biological father is in Salem and Paulina has to decide whether to tell Lani or not. It also looks like there is more to her story than she originally claimed as she may be keeping even more secrets from those who love her. Uh-oh. What could it be now? Stay tuned to Days of Our Lives weekdays to see how these stories play out.