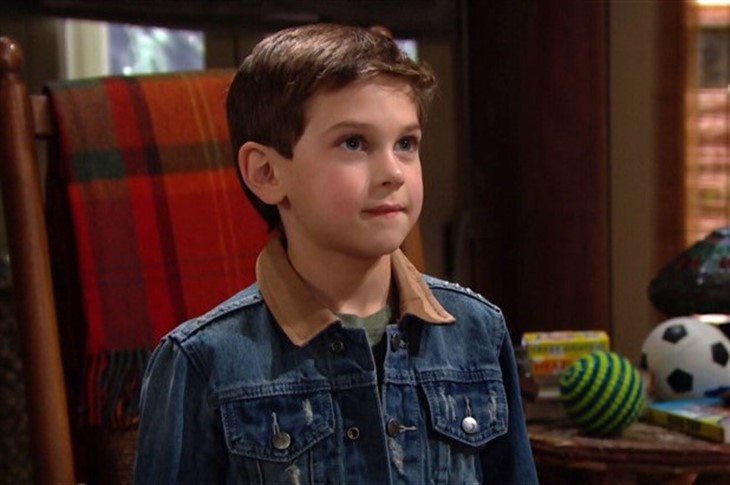 The Bold and the Beautiful (B&B) spoilers for Tuesday, January 25, 2022, reveal Douglas not being able to hold himself back when visiting with his dad and the Forrester side of the family.

It took Douglas Forrester (Henry Joseph Samiri) weeks to convince those Logan-Spencer people he is forced to live with that he saw Grandma kissing Santa Claus on New Year’s Eve. Grandma begged him to keep that gem a secret, but we all know Douglas can’t keep secrets. After all, he made a very firm announcement that Beth is Phoebe and Phoebe is Beth a few years back and Liam (Scott Clifton) believed him immediately.

When Thomas Forrester (Matthew Atkinson) finally gets to spend some time with his son, Douglas seems distressed, so Grandpa asks him what’s wrong and assures him he can tell him everything. So, he does. He tells Ridge (Thorsten Kaye), Steffy (Jacqueline MacInnes Wood), and Thomas that he saw Brooke kissing Santa and they have no idea what that means. Can Ridge be that dumb? At least it looks like Thomas and Steffy eventually seem to understand what Douglas is talking about and it doesn’t look good for Ridge and Brooke’s ninth marriage.

Brooke Logan Forrester (Katherine Kelly Lang) pretty much knows that Ridge is going to have a cow when he learns what she did with Deacon Sharpe. After all, he lost it when she kissed Dollar Bill Spencer (Don Diamont) back in 2020. That caused him to fly off to Vegas and marry Shauna Fulton (Denis Richards), although technically he was still married to Brooke.

While Brooke has both her own self and Sheila Carter (Kimberlin Brown) to blame for her troubles, she takes it all out on Taylor Hayes (Krista Allen). After all, if Taylor hadn’t returned, Brooke wouldn’t have felt the need to take a drink, right? It couldn’t be anyone who switched her drink and it certainly can’t be because Brooke is a completely insecure grandmother who has spent her entire life since college hoping Ridge would love her best. Stay tuned to The Bold and the Beautiful weekdays to see how these stories play out.