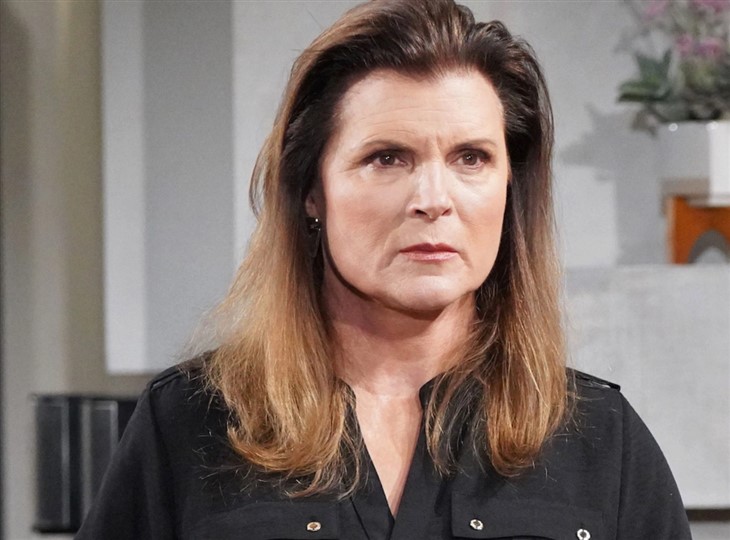 The Bold and the Beautiful spoilers document that Sheila Carter (Kimberlin Brown) can only see a smidgen of plot road ahead. With John Finn Finnegan (Tanner Novlan) escaping, Deacon Sharpe (Sean Kanan) refusing to help her, and the police circling, how many more episodes can Brown’s character plausibly be written into?

Fans of B&B, along with crossover fans of The Young and the Restless, where Sheila originated in 1990, know that this infamous soap opera character is masterfully ingenious. She has survived when other mortals would not have.

So, a coming capture could happen. Sheila could also escape from Los Angeles, California, and blend into some other part of the world indefinitely. Of course, a wild card factor could also be ahead.

The Bold And The Beautiful Spoilers – Mike Guthrie Is A Groupie

A maximum-security prison would not ensure Sheila’s permanent residence in whatever facility she would occupy. However, the local prison has not proven to be useful, as Mike Guthrie’s (Ken Hanes) assistance verified.

Sheila was being transferred to a federal facility when Mike reappeared after not being seen on B&B in years. He was revealed to be in love with Sheila, meaning that Hanes’ character slots into the category of inmate groupies.

Mike facilitated both of Sheila’s recent escapes. A third time will not be the soapy charm since he has been arrested by the police and is presumably in prison himself.

Steffy Forrester Finnegan (Jacqueline MacInnes Wood) is just starting to process being with her beloved husband again. The magnificent reunion scenes in Monaco imply that the Finnegan family, along with Ridge Forrester (Thorsten Kaye) and Taylor Hayes (Krista Allen), will be flying home soon.

As long as Sheila remains on the loose, further drama may happen. Having Steffy, in particular, face off with Sheila would inject a strong sense of justice into this arc’s end.

But the easy ending, where legacy characters deal with their longtime nemesis and Sheila is walked out of a scene in handcuffs would seem uneventful, even as a projection.

The Bold And The Beautiful Spoilers – Will Sheila Carter Ever Be Killed Off? It Is Possible But Does Not Feel Likely.

However, Y&R fans know that Michelle Stafford (Sheila) was playing a dual role in 2007 when this character was believed to be killed off. Brown’s return to B&B in 2017 included dialogue questions about Sheila’s apparent midwestern fate. She talked away the rumors of her demise, which were not reexplored.

A natural escape route back to Genoa City, Wisconsin, appears more open than ever at this point in B&B’s plot. So, are TPTB on both shows in the process of facilitating a cross-back to Sheila’s first soap home?