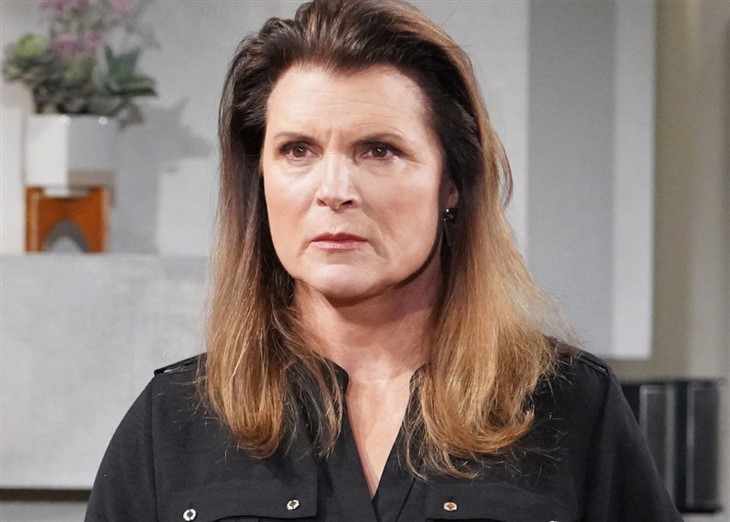 The Bold and the Beautiful (B&B) spoilers document that Sheila Carter (Kimberlin Brown) turned to one of her last known sources of help. She remains a fugitive who is desperate to avoid returning to jail.

Deacon Sharpe (Sean Kanan) has been trying to live a clean life since being released from prison. But he remains on probation, as he told Sheila.

She does not care about the legal jeopardy Deacon was put in moments before Deputy Chief Bradley Baker (Dan Martin) arrived with his officers. He was seeking Sheila at a location where it was reasonable to believe she might be hiding and was.

The Bold And The Beautiful Spoilers – Upgrading Deacon Sharpe’s Accommodations

Were Deacon’s accommodations upgraded? He appears to no longer be living in the storage closet, following the fierce fight he had with Ridge Forrester (Thorsten Kaye) earlier this year.

Sheila derided Deacon’s digs in the past. But now that she is desperate not to be captured, Sheila finds his seeming living space to be okay.

Kanan’s character knew that he was in danger the instant he opened the front door, and Sheila was standing there in her hoodie.

Sheila is so delusional that she described what she has done for her son, John Finn Finnegan (Tanner Novlan), in recent weeks as a gift.

Deacon recognized that Sheila lost touch with reality to a greater extent than before. She rationalized shooting Steffy Forrester Finnegan (Jacqueline MacInnes Wood) as something that was deserved. Deacon responded with intensity, telling Sheila that she was not the victim.

Brown’s character smiled as she told Deacon her tale. She described Finn surviving her shooting him as beautiful. She attempted to pass off caring for Finn in recent days as a main point, rather than a forced event.

Deacon was reading a book and thought the knocking represented a coworker who needed a shift covered. If only.

Sheila told Deacon her fantastical story while appearing to leave out many of the messy parts. She was with him for a very short period when Martin’s character and the other police officers arrived.

The last thing Deacon needs is for the police to believe he was knowingly harboring Sheila. But will she be able to protect herself and help Deacon avoid arrest on B&B as the next part of this drama plays on?