B&B Spoilers: What Happens To Thomas When CPS Truth Comes Out? 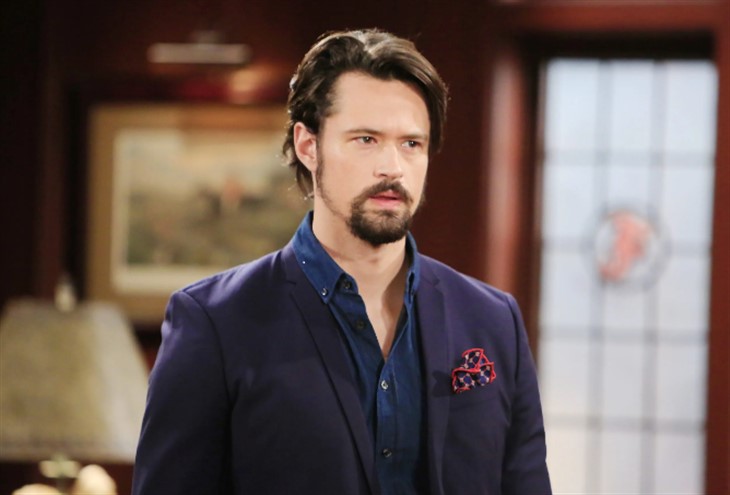 The Bold and the Beautiful (B&B) spoilers reveal that Thomas Forrester (Matthew Atkinson) was the one behind the CPS call, not Brooke Logan (Katherine Kelly Lang). Thomas told Brooke he was willing to do whatever it takes to make her pay for destroying his family. I would say he means business since he is taking a major risk by setting Brooke up. Putting his chance at having any custody of Douglas Forrester (Django Ferri), Thomas is showing that he clearly hasn’t changed and is even more unhinged than before.

The Bold And The Beautiful Spoilers – Shocking Discovery And Betrayal

B&B spoilers reveal that since Ridge Forrester (Thorsten Kaye) thinks he has been betrayed by Brooke, I would assume he would be spending a lot more time at the mansion trying to figure out what to do next. He spends even more time with Thomas and starts to realize that maybe Brooke isn’t behind the call.

Thomas has started to act more and more anxious and fidgety. Ridge begins to see what Brooke has all along, Thomas has been manipulating everyone this whole time. Ridge now suspects that Thomas was behind the call and starts to investigate to find out the truth.

Unable to find any concrete evidence Ridge begins to think that maybe Brooke really did call until he overhears a heated argument between Thomas and his friend with ties to CPS. I could see Walter trying to extort money from Thomas to keep his deception a secret.

Ridge could be caught by Walter before Thomas has time to see him. Walter may take this as a way to get back at Thomas since he won’t give into Walter’s demands. Ridge being close enough to hear figures out that Brooke is innocent, he texts her saying he has something he needs to discuss with her and to meet him at the mansion. Walter, seeing the damage he is about to cause leaves in a rush leaving Thomas confused until he turns to see his dad staring at him angrily.

Ridge confronts Thomas, asks him how he could do this, why he would betray him and how much of a monster he is. I can see Thomas finally snapping and going after Ridge. The fight starts to become more brutal; both men are pretty banged up when Brooke and Liam (Scott Clifton) walk in.

Liam joins in pulling Thomas off of Ridge and both men restrain him. The trust comes out and Brooke can’t believe it. She lets Ridge know that she was right all along and that he needs to be committed.

The Bold and the Beautiful Spoilers – Committed?

Hastily Ridge could agree and already be on the phone to have them get Thomas. How will this affect the custody as well as everyone’s relationship in LA? How will Taylor Hayes (Krista Allen) and Steffy Forrester (Jacqueline MacInnes Wood) react when they find out that Ridge went behind their backs (along with Brooke) and had him committed? I can’t wait to see what happens next.