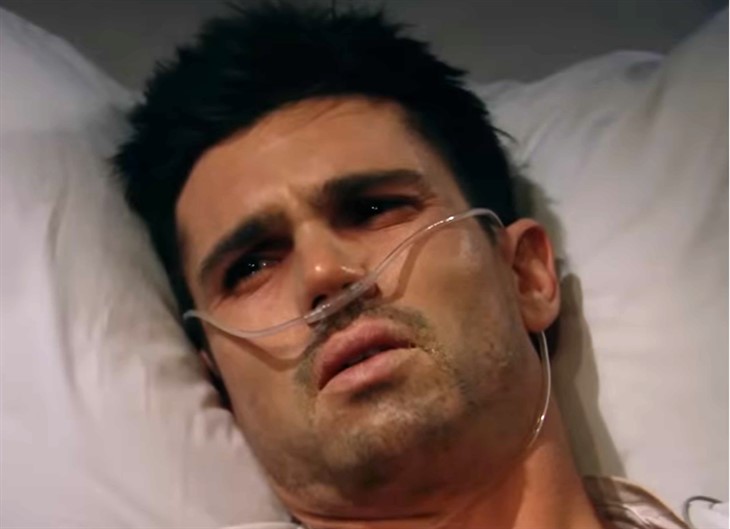 The Bold and the Beautiful (B&B) spoilers for Wednesday, July 6, 2022, reveal Finn really and truly waking up — to a shocking scene.

B&B fans haven’t seen John ‘Finn’ Finnegan (Tanner Novlan) awake in more than two months, but Wednesday is finally the day. Sure, he has vaguely opened his eyes and mumbled a few times over the last several weeks, but he has never been truly conscious until now.

It was touch and go there for a while as Sheila Carter (Kimberlin Brown) thought she lost her son a second time when he flatlined, but that cosmic connection with Steffy Forrester (Jacqueline MacInnes Wood) took over and she somehow brought him back to life from Europe. AMAZING! Well, Sheila also tried to shock him with paddles, putting her nursing skills to work.

However, Finn doesn’t wake up to amazing circumstances. He is with his crazy biological mother and her trusty sidekick, Mike Guthrie (Ken Hanes), in a hotel room hooked up to machines. And he seems to actually remember Sheila shooting him, so he is not happy at all. How will Sheila manage to keep him calm when she can never manage to keep her own self calm?

B&B Spoilers -Sheila Carter Has Too Many People After Her

As Sheila revels in Finn being awake, she has to remember that she is still a fugitive, and way too many people want to find her. She also committed another crime when she chased Li Finnegan into an alleged watery grave in the ocean. (She can’t really be dead, right?)

Ridge Forrester (Thorsten Kaye) and Taylor Hayes (Krista Allen) are also determined to make sure Sheila is brought in, brought to justice, and pays for everything she has done. They talk a lot but don’t figure out exactly how they are going to find her, but that doesn’t mean they’re not determined.

Perhaps they will get a clue on how to find Sheila when Jack Finnegan (Ted King) arrived back in LA. He has to know something, right? Or what use is he? After all, he did have an affair with the woman so he might know some of her more unknown quirks. Stay tuned to The Bold and the Beautiful weekdays to see how these stories play out.