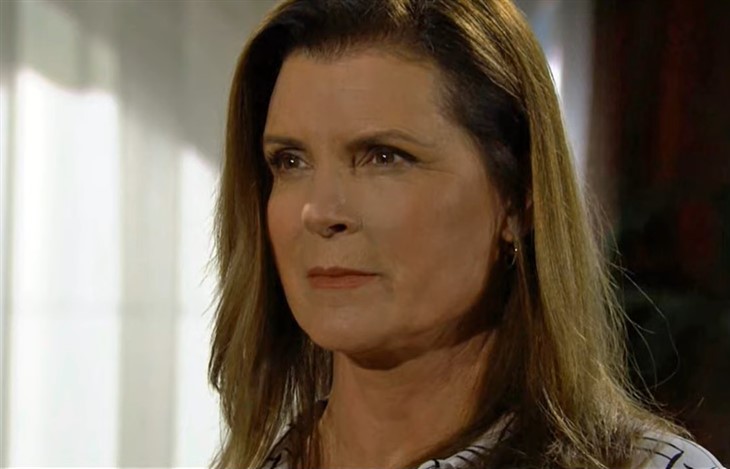 The Bold and the Beautiful spoilers suggest that Sheila Carter (Kimberlin Brown) escapes. It is confirmed that during the week of June 13, Deputy Chief Bradley Baker (Dan Martin) relays alarming news to Ridge Forrester (Thorsten Kaye) and Taylor Hayes (Krista Allen). It is also teased that Brooke Logan Forrester (Katherine Kelly Lang) gets a fright while alone at home.

The Bold And The Beautiful Spoilers – Brooke Logan Forrester’s Foreshadowing

B&B spoilers reveal that Brooke recently shared how uncertain she was that Sheila had finally been arrested. Brooke was worried that Sheila might avoid going to prison or escape. Then, she seemed confident that the nightmare was over thanks to Ridge.

Brooke made the mistake of visiting Sheila in prison. When Sheila promised that Brooke hadn’t seen the last of her, it was unsettling. It seems that Brooke’s original fear of Sheila getting out could have been a foreshadowing.

This theory seems to be confirmed by a video that Lang posted of her recovering from a broken ankle. In that video, Lang was working on memorizing lines from a new script. One eagle-eyed fan took a screenshot and was able to share what the script showed.

The Bold And The Beautiful Spoilers – Home Invasion Fear

The Bold and the Beautiful spoilers reveal that the script talks about Brooke being home alone when she hears someone enter. Brooke is terrified because Sheila escaped and is still on the loose. Even though Brooke thinks it’s Sheila coming to attack her, it turns out that it’s just Ridge. The two discuss Sheila and Brooke’s fear in that script.

While Brooke’s fear might be valid, there could be someone else that Sheila is focused on. That person is her son.

Plus, summer spoilers by head writer/executive producer Bradley Bell were published in Soap Opera Digest. The soap boss confirmed that Sheila learns Finn is alive. It also says that Sheila hopes that Finn gets healthy again.

Just by the way it was worded, it sounds like Sheila gets to see Finn or receives updates on his condition. So, could Sheila find out Li’s secret and blackmail her? Li’s actions broke multiple laws. So, Sheila could threaten to make sure Li goes to prison unless she gets to visit Finn. How will the Forrester and Logan families react? We will have to keep watching the CBS soap to find out.