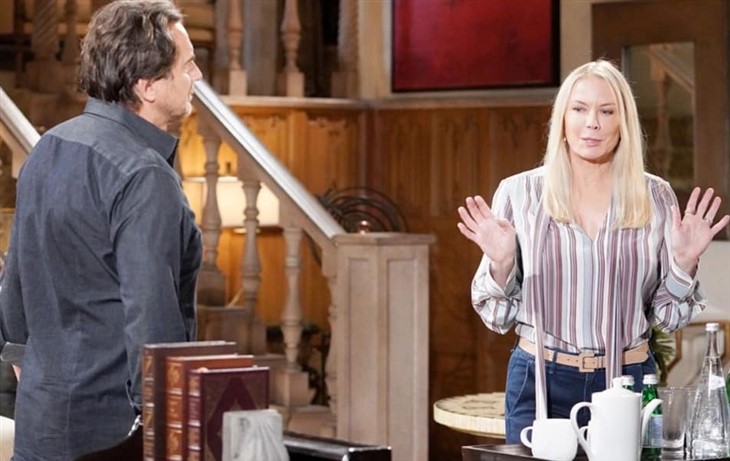 The Bold and The Beautiful spoilers and updates tease that Ridge Forrester (Thorsten Kaye) will finally make his choice! He still loves Taylor Hayes (Krista Allen) but he’s committed to his marriage and will go home to Brooke Forrester (Katherine Kelly Lang) in an upcoming BOLD episode!

The Bold And The Beautiful Spoilers – The Coast Is Clear

The coast is clear: Sheila Carter’s (Kimberlin Brown) in jail and Steffy Forrester Finnegan (Jacqueline Macinnes Wood) is in Paris with the kids, and Ridge decides between Taylor and Brooke. He has feelings for both of them – he’ll always have feelings for Taylor, she’s the mother of two of his children. But he is still married to Brooke, and he can’t stay in limbo and be with both women, and he has to make a choice!

Brooke is pushy, and insistent, and knows what she wants and goes after it, while Taylor wants her man to pursue her, not the other way around. Ridge decides to put the ball in Brooke’s court – with conditions; Deacon Sharpe (Sean Kanan) has to go, Hope Spencer’s (Annika Noelle) father or not!

B&B Spoilers – The Ball Is In Brooke Forrester’s Court – Him, Or Me!

According to The Bold and the Beautiful spoilers, Ridge makes it very clear to Brooke that if she wants him, Deacon cannot be in their lives anymore. It doesn’t matter whether he’s Hope’s father, he doesn’t want him even in the periphery of their lives- Ridge will not put up with an ex-lover anywhere in the vicinity!

The only problem is that Hope’s cabin is between their house and the Forrester mansion and although he doesn’t tell Hope to move again he doesn’t want to see Deacon around! It’s up to Brooke – but he doesn’t want Deacon in Brooke’s house or around Brooke whatsoever, he doesn’t want to be running into the guy in the yard! It’s basically down to whom does she want more – Deacon whatever way she can get him or Ridge as her husband?

The Bold And The Beautiful Spoilers – What’s HE Doing Here?!

The last other guy that Ridge wants to see is Dollar Bill Spencer (Don Diamont) and here HE is, with some advice, this guy, that dumped him into the ocean! Spencer wants to put in his two cents that his dollar has devalued itself to, but he actually seems supportive so Ridge lets him speak his piece! Dollar Bill just doesn’t want Ridge to screw things up with Brooke and Ridge accepts what he says as an attempt at friendly advice.

Dollar Bill is still hurting over losing Katie Logan (Heather Tom) and screwing it up with her, so he actually is showing some empathy. Ridge thanks him for his input and lets him know he appreciates it.

Ridge hears from Brooke that she’s willing to boot Deacon from her life although she says Deacon’s relationship with Hope needs to be up to Hope, not to Ridge. He’s not sure what to do about Taylor – although he doesn’t say that to Brooke. All he knows is he still loves Brooke and wants to help Steffy heal, and that he wants his marriage to work. He has feelings for Taylor but he’s invested in his marriage and in Brooke.

Be sure to catch up on everything happening with BOLD right now. Come back here often for The Bold and The Beautiful spoilers, news, and updates