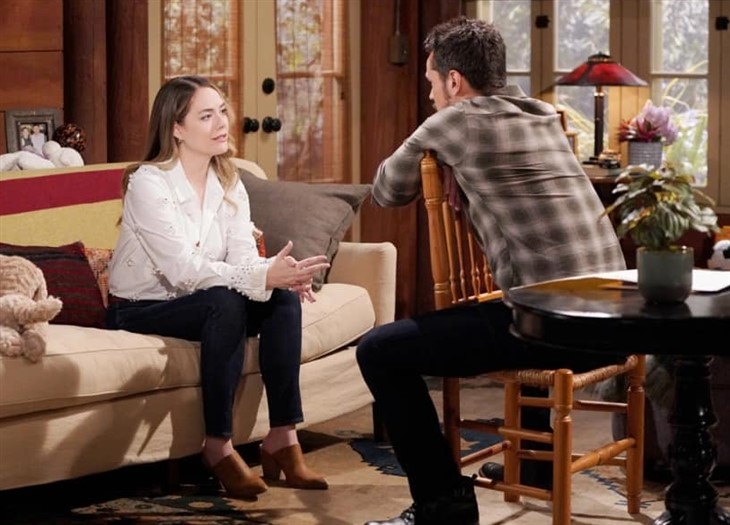 The Bold and the Beautiful (B&B) spoilers document that Thomas Forrester (Matthew Atkinson) is playing the victim. He was reported to children’s services by someone, with Atkinson’s character emphatically stating that Hope Spencer’s (Annika Noelle) mother, Brooke Logan Forrester (Katherine Kelly Lang), is the culprit.

Ridge Forrester (Thorsten Kaye) is convinced his wife has betrayed him again. Her heard what appeared to be Brooke’s voice on a recording that a former Forrester Creations designer, who just so happens to be a consultant for a Los Angeles County department that deals with child endangerment, had access to and played for Ridge and Thomas.

But Douglas Forrester’s (Django Ferri’s) recent use of a smartphone application that sampled the voice of Donna Logan (Jennifer Gareis) implies foul play was used to make Brooke look guilty.

The Bold And The Beautiful Spoilers – Thomas Forrester Was Threatened

Thomas recently decided that he needs to be a full-time father to Douglas. So, he shared that idea with Hope and followed through on it.

In what was originally supposed to be a short stay, Thomas kept Douglas at his grandfather’s home for a period of days.

Brooke stopped by Eric Forrester’s (John McCook) mansion, where Thomas moved into, and told her stepson that Douglas’ time was up, and that he needed to return to the cabin. She also took offense to Thomas’ use of a pocketknife to cut an apple, believing it represented a grave danger to Douglas and was also used to threaten her life.

Hope is known as someone who sees the best in other people. That character trait has been tested beyond all measure by Thomas since the recast to Atkinson happened.

Noelle’s character sees growth in Thomas. She wants him to be an involved father in her adopted son’s life. She disagrees with Brooke and her husband’s knee-jerk interpretation of how Thomas has handled current matters.

Thomas is someone Hope wants to succeed. So, her mother’s perceived actions, in reporting Thomas to the authorities, will not be received well. That begs the question regarding who would stand to gain the most by setting Brooke up?

Liam Spencer (Scott Clifton) has seen Thomas in action in recent years. He knows how often he has upset Hope and intentionally disrupted their marriage.

While Clifton’s character does not believe Thomas is capable of pulling Hope away from him, he does fear a future where Douglas’ father becomes a regular part of their lives again. Douglas’ extended stay at the cabin, which is said to be a number of years using the daytime world’s calendar, led to a stretch of stability specifically because Thomas was neutralized.

Liam is right to think that Thomas may not only destabilizing Douglas’ life but will also create needless, painful drama for Hope on B&B.