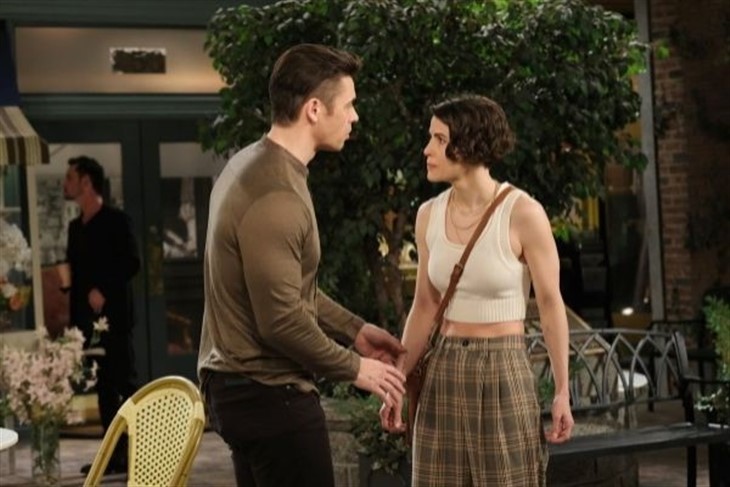 Days of Our Lives spoilers reveal that Xander Cook (Paul Telfer) could break his promise to Sarah Horton (Linsey Godfrey). Xander meets with a mysterious woman. This woman could offer Xander money to get revenge. Knowing Xander, he will probably take the offer. What will this do to Xander and Sarah’s marriage, though?

For one thing, Sarah actually left Xander after finding out about Nicole Walker (Arianne Zucker) and Sami Brady (Alison Sweeney). However, Maggie Horton Kiriakis (Suzanne Rogers) pushed Sarah to go back to Xander. Even though Sarah did return to Xander, it’s clear she still has some concerns about the man she married.

A promo on Peacock shows Xander meeting with a mysterious woman in disguise. It’s not clear who this woman is. However, the audio in the promo teases that the woman talks to Xander about revenge. Xander asks what kind of revenge she is talking about. So, it’s clear that this must be a hired revenge job and Xander might not be able to say no.

Days of Our Lives spoilers reveal that Xander might try to keep Sarah in the dark about what he’s doing. However, the truth always comes out eventually. With Sarah’s uncertainty about being married to Xander as well as the sneaking around, the truth is bound to come out.

When Sarah finds out that Xander broke his promise, it could mean the end of their marriage. This would probably give Gwen Rizczech (Emily O’Brien) an opening to get Xander back. In fact, Gwen would totally understand why Xander couldn’t turn down the paid revenge job. After all, Gwen and Xander are a lot alike.

As for Sarah, she might be expecting too much from a guy like Xander. While Sarah has put up with a lot from Xander, she always saw his potential and good intentions. At the same time, Sarah has tried to change Xander. With Gwen, Xander was able to be more honest and more of himself.

What do you think is going to happen when Xander meets with the mysterious woman? Will this be the last straw for Sarah? Would Gwen be a better match for Xander than Salem’s good doctor? Share your thoughts and remember to keep watching the soap on Peacock to find out what happens next.