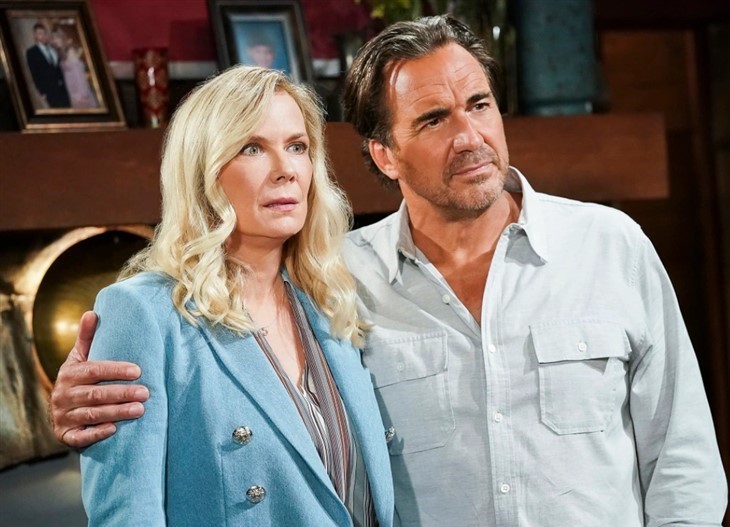 The Bold and the Beautiful (B&B) spoilers show that someone called Child Protective Services on Thomas Forrester (Matthew Atkinson) and they arrived at his doorstep to question him and Douglas Forrester (Django Ferri) about what was happening and if he was playing with a knife.

Of course the claims were verifibly false, but now the question is who did it and why. All thoughts immediately went to Brooke Logan (Katherine Kelly Lang) who has said herself that she would call CPS on Thomas should the need ever arise. This led to Ridge Forrester (Thorsten Kaye) calling and questioning her.

The Bold And The Beautiful Spoilers – Brooke Logan’s Innocence

Hoenstly, I don’t think she was the one who called. She seemed genuinely surprised and taken back a bit and I think she would be a bit more fake emotional had she actually done it. She would overplay it while trying to hide her life.

It definitely feels like someone did this to set her up and make her out to be the bad guy. My thoughts immediately go to one and only one person, Steffy Forrester (Jacqueline MacInnes Wood). She has been going hard in the paint on Brooke and this would be the perfect way to not only make her look terrible but to also help her brother in a weird way.
Once the CPS realize that nothing is going on and that it was a mistake they were called, it might look bad on Hope Logan (Annika Noelle).

To make things even more hard to trace, did Steffy use the voice changer that Douglas was playing with to make her voice sound more like Brooke when she called. Had she called with her normal voice, that may have come back on her in some way.

However, if she covered it and changed it with the voice changer, it puts Brooke in an even deeper spot. I feel like this is absolutely what happened and it will be incredibly difficult for Brooke to talk her way out of this one.

Now, she’ll have to answer to Ridge as well, and this could mean the end of their marriage. Steffy may have gotten everything she wanted in one call. Her mommy and daddy back together, rub one in Brooke’s face and helping her brother.

What do you think? Did Steffy use the voice changing app to sound like Brooke and call CPS? Share your thoughts and remember to keep watching the CBS soap to see what happens next.

Days Of Our Lives Spoilers: Nancy And Mike Clear Things Up