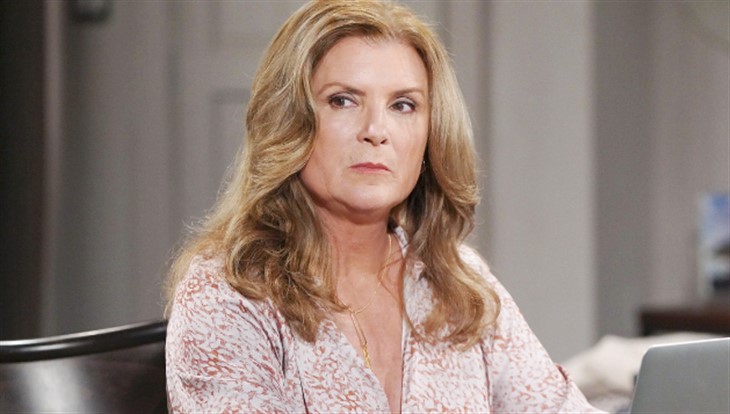 The Bold and The Beautiful spoilers and updates tease the hunt will be on for fugitive Sheila Carter (Kimberlin Brown) when she bolts Los Angeles. Someone found out that she’s indeed alive, and Genoa City had better watch out!

The Bold And The Beautiful Spoilers – Deacon Sharpe’s Threat

Deacon Sharpe (Sean Kanan) and Sheila have been arguing lately about Sheila’s secret sneaking out, only it’s not been a secret to him, she’s almost been caught twice already. Deacon keeps telling Sheila that if she isn’t careful, she’ll get them both back in prison; Sheila says no one will ever recognize her in her disguises, she’s got several now. They continue to argue about her field trips, especially about the ones where she sneaks around the cliff house, and lurks and peeks at her son and grandson.

Frustrated, Deacon makes Sheila furious when he threatens to call the police on her himself and accuse her of breaking into his apartment. Sheila says that will never fly because too much evidence of her having lived there will be found, but soon she has to flee even though Deacon stops threatening.

B & B Spoilers – Circumstances Beyond Their Control

Circumstances beyond Deacon and Sheila’s control come together pressuring them both beyond belief. They culminate in a request for Deacon’s help from John “Finn” Finnegan (Tanner Novlan) and Steffy Forrester Finnegan (Jacqueline Macinnes Wood). It seems that somehow Sheila’s toe, which Ridge Forrester (Thorsten Kaye) had morbidly taken a photo of was delivered to Finn by Detective Alex Sanchez (Jeremy Ray Valdez).

The case of Sheila’s “death” had been closed and they no longer needed it for evidence, and Finn is her closest relative-but he became suspicious she cut it off herself. Now Deacon gets a request for help after Finn does some detective work of his own, and they want him to contact the police if he hears from her.

The Bold And The Beautiful Spoilers – Sheila Carter Must Flee

Deacon knows of a vacant house owned by an old girlfriend named Diane Jenkins (Susan Walters) there in Los Angeles, but he’s not sure Sheila would be safe there. There have been too many Genoa City people snooping around asking questions about Diane’s past lately, and what if they go looking there and find Sheila? Sheila may have her disguises and even different personas she can use but she thinks Genoa City would be so obvious no one will look for her there.

Deacon tells her don’t try to outguess where the police will look for her and wishes her good luck. She hits the road with a plot and a plan, but maybe Deacon is right.