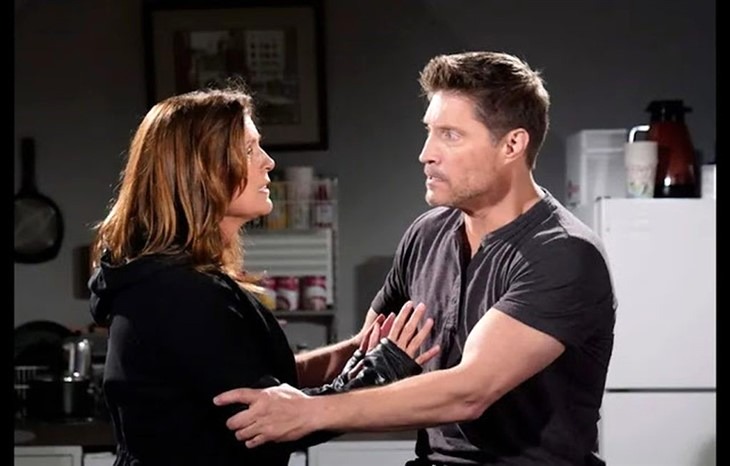 The Bold and The Beautiful spoilers and updates tease that Sheila Carter (Kimberlin Brown) and Deacon Sharpe (Sean Kanan) will tangle and she’ll decide to split. This will be after Deacon threatens to turn her into the police, with other circumstances later forcing her on the run for real.

The Bold And The Beautiful Spoilers – Close Friends, Close Calls

Sheila and Deacon have had a nice little love nest but Deacon’s really not doing anything most red blooded males wouldn’t. Sheila’s thrown herself at him from the start, first seducing him disguised as a beautiful redhead named Debra, but Deacon had a fall from the wagon, before falling in bed. But Deacon sobered up very quickly once he realized his sexy redheaded bed partner was missing a toe.

The Bold and the Beautiful spoilers show Deacon soon realized that “Debra” was really Sheila, and if anyone found out she was in his apartment he’d be harboring a fugitive. There have already been two very close calls, once when his probation/parole officer showed up unannounced and once when his daughter did, although Hope Logan (Annika Noelle) didn’t recognize her.

Close quarters with Sheila suffering cabin fever have made for cranky roommates with benefits, and Deacon and Sheila arguing about her “field trips” outside. She always goes to the cliff house where her son and grandson live with his wife, and once Deacon caught her and brought her back.

Another time he didn’t and although Steffy Forrester Finnegan (Jacqueline Macinnes Wood) wasn’t home, John “Finn” Finnegan (Tanner Novlan) was alone with Hayes Finnegan (Iliana and Vienna Norris) were. Sheila snuck in the house and played for some time with her grandson while Finn answered a phone call in another room, and Deacon has to be more vigilant. Deacon, frustrated with Sheila’s dangerous outings, makes a severe threat, and Sheila is furious.

The Bold And The Beautiful Spoilers: He Wouldn’t Dare

Deacon threatens if Sheila doesn’t stick to the plan and stay in the apartment, he’ll call the police and turn her in; he can call the anonymous tip line. Sheila, furious, tells him to just try, he’ll never live to tell, besides, she’ll just tell on him and he’ll be back in prison. Deacon argues he can call at any time anonymously about a woman matching her description at the cliff house, and the police will do the rest.

Sheila decides it’s time to split, and starts to pack her things, but if she’s going down, so is Deacon. They patch it up for the time being but he warns her she’d better make plans to run; little do they know by the end of the week, she’ll have to.