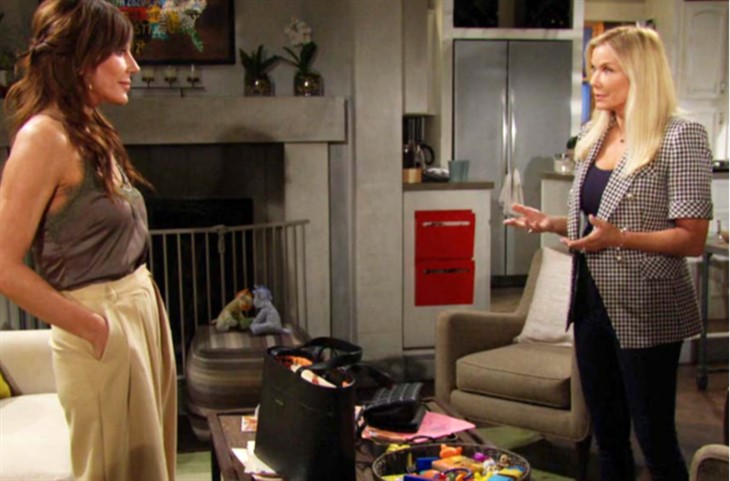 The Bold and the Beautiful spoilers document that Brooke Logan (Katherine Kelly Lang) had a revealing conversation with Taylor Hayes (Krista Allen) in a setting that should have represented reconciliation for Ridge Forrester (Thorsten Kaye).

The Forrester mansion was the backdrop for what proved to not be a verbal slam between Brooke and Taylor. Instead, each lady said her peace and offered sincere empathy.

This well-written and performed scene was a watershed moment. While Ridge is off searching his soul, the two women who love him more than any on the planet commiserated in the aftermath of the smartphone app scandal.

The Bold and the Beautiful spoilers show Ridge is infuriated by Thomas Forrester’s (Matthew Atkinson) actions. Taylor is more ashamed of them.

Thomas has broken trust with everyone who cares about him, including Brooke. While she does not trust him, there is no doubt that she tried to be a stepmother to the character Atkinson plays. But he rejected her attempts to help him along with those of all others.

Kaye’s character said he will talk to Eric Forrester (John McCook) about Thomas’ place at Forrester Creations. Fans can rightfully speculate about what Thomas’ future will be or if it will be in Los Angeles, California.

Brooke told Ridge to take time to clear his head. She needed to clear hers as well after what was just exposed.

To think that Ridge decided to keep the details of the Child Services call from her is baffling. But that plot point was needed to advance the storyline through the fall to its climax in early December.

It feels like she would accept that decision if Ridge decides he wants to reconcile with Brooke. But who knows what might happen between now and whenever then is.

Will Taylor remain In LA if Ridge decides not to remarry her?

Might Taylor digest that Ridge did not choose reconciliation but was spurned by Brooke’s perceived betrayal and then decide that committing to him is not healthy?

It could be that TPTB are writing Taylor out. But that potential is only possible with plenty options ahead for all involved characters.

Taylor and Brooke decided that Ridge can not be vacillating between them. They enabled that behavior and have been hurt badly in doing so. Both ladies do not want to feel this level pain again or see Ridge in anguish as he is on B&B.