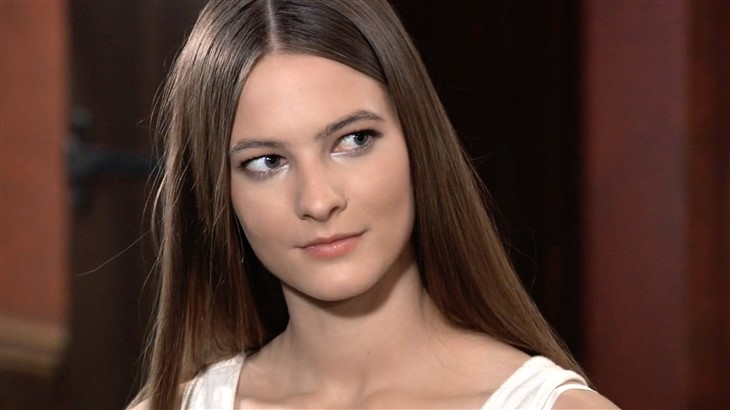 General Hospital spoilers tease Esme Prince (Avery Kristen Pohl) doesn’t seem to be very good at gauging when she’s out of her own depth. Elizabeth Baldwin (Rebecca Herbst) might seem like a well-meaning nurse and mother of three boys who has a soft spot for young, unwed moms, but she doesn’t see Esme the way Esme sees herself. Rather, in Liz’s eyes, Esme is a criminal who tried to destroy her son’s life and now wants to do the same to her friend, Nikolas Cassadine (Marcus Coloma). She won’t have it. So when Esme comes for Liz with idle threats, she’s going to clap back in a big way.

General Hospital spoilers show Esme is going to attack Elizabeth on a very personal level — her son. When Esme taped Cameron ‘Cam’ Webber (William Lipton) and Josslyn ‘Joss’ Jacks (Eden McCoy) in the most intimate of moments and subsequently shared that footage with the entire PCU campus, Elizabeth was destroyed for her son and Joss. There was nothing she could do to fix it, and to date, no one has paid for the crime yet.

To make matters worse, Esme tried to send Trina Robinson (Tabyana Ali) to jail in her place. How will Esme possibly threaten worse at this point? Does she have more footage she hasn’t released yet that could further destroy Cam? Will she try to coerce Liz into being the lynchpin and doing as she asks — otherwise, she will deploy part two on Cam and ruin his life?

Whatever it is, when Esme threatens Cam, Elizabeth will let her know who she’s messing with. The good nurse has enough going on in her life right now with her boys, her parents, and her relationship with Hamiton Finn (Michael Easton). The last thing she needs is a threat from Esme hanging over her head. When Esme implies she has yet to be finished with Elizabeth’s family, Liz will let her know one more threat like that and Esme will be finished, period.

General Hospital Spoilers — “I Saved You”

Elizabeth won’t hesitate to remind Esme she’s only here right now cooped up in the north tower of Wyndemere because Elizabeth told Nikolas to leave her there. Otherwise, she could be in jail right now. Elizabeth didn’t run to the police and squeal, and yes, she did so to save Nikolas, but she’s also saving Esme’s behind, too. If Esme plays her cards right, she will end up living in the lap of luxury forever in Greece on Nikolas’ dime.

However, if she keeps provoking Elizabeth, she can go to the cops at any time. When Esme calls her bluff and says she knows Elizabeth wouldn’t do that to Nikolas, Liz will tell her to try and tell the cops otherwise because it would be her word against both of theirs. Besides, why would Elizabeth turn herself in if she was guilty? It’s the perfect ploy, and Esme won’t have a comeback. Stay tuned for more GH news and spoilers just ahead.

B&B Spoilers: Liam Has An Uncomfortable Run In With Bill, He’s Off The Rails