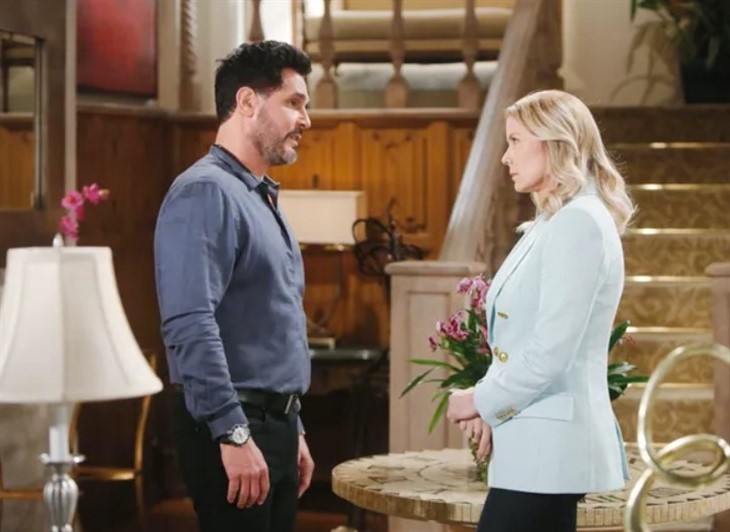 The Bold and The Beautiful spoilers and updates tease that Brooke Forrester (Katherine Kelly Lang) will get a surprise visit from Dollar Bill Spencer (Don Diamont). Ridge and she will have had a horrible argument, he walks out, and Bill gives her a lead on where to find him.

The Bold And The Beautiful Spoilers – It Wasn’t Her

Brooke knows it wasn’t her who made the call to CPS about Thomas Forrester (Matthew Atkinson) even though she knows he is very dangerous, having sharp knives. She saw it with her own eyes, and he pointed that knife at her and warned her to stay out of his business with Douglas Forrester (Django Ferri). She warned Ridge if Douglas wasn’t brought home to where he is safe, with Hope and Liam Spencer (Annika Noelle, Scott Clifton) she would call, but so far she didn’t.

Brooke is very upset when she tells Ridge not once, but twice, that it wasn’t her and he tells her it’s over and takes off to parts unknown. He’s not at the Forrester mansion and he’s not at work, and he’s not at the cliff house; it’s like he’s disappeared from the face of the earth.

B & B Spoilers – He Accused Her Of Lying

Brooke bemoans to Liam and Hope that Ridge accused her of lying, and all he would say is that he needed space but he was furious; he said he’s through. No one knows – or will tell her – where he is, and he didn’t go on the Forrester jet, and his phone is shut off. After the fiasco with Shauna Fulton (Denise Richards) in Las Vegas she considered putting a tracker on his phone but decided against it, and now she wished she had.

The Bold and the Beautiful spoilers say Brooke just knows that Thomas and Steffy Forrester Finnegan (Jacqueline Macinnes Wood) are thick in the middle of this stunt, spoofing her phone number and somehow, her voice. And Ridge fell for this fraud, and believes this so called report to Child Protective Services and not her, and now he’s god knows where!

The Bold And The Beautiful Spoilers – Knock Knock

Soon after Brooke venting and ranting to Liam and Hope about Ridge’s and her umpteenth fight and breakup, there’s a knock on her door, and it’s Dollar Bill. Apparently, Liam told his father what had happened, and Bill had an idea where Ridge might have gone, although he’s not sure it was planned that way. He tells Brooke that he told Steffy about some property he’s trying to sell in Aspen, and he knows she and Taylor went there to look at it.

Brooke is livid, and now she blames Taylor for setting up the whole thing to steal her husband, although Bill tries to calm her down. He wouldn’t be surprised if Steffy told her father they were going there to look and gave him the address, although he thinks Taylor’s planning it is a reach.