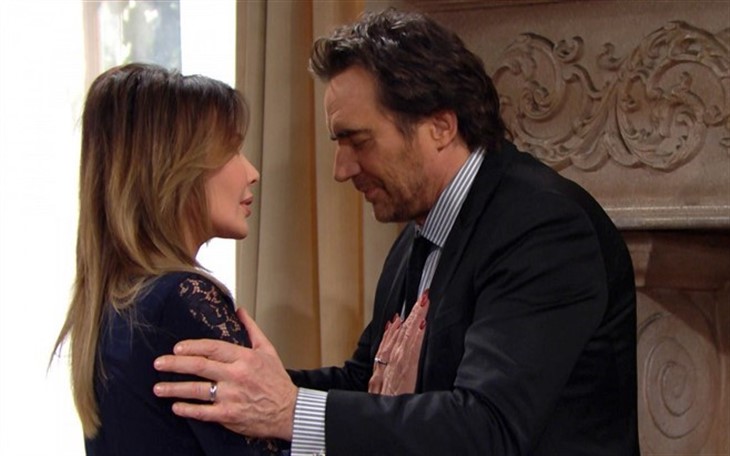 The Bold and the Beautiful spoilers reveal that Ridge Forrester (Thorsten Kaye) is heartbroken when he finds out the truth about New Year’s Eve. After Douglas Forrester (Henry Joseph Samiri) tells the whole story, Ridge is comforted by Taylor Hayes (Krista Allen). Meanwhile, Steffy Forrester Finnegan (Jacqueline MacInnes Wood) plans to take Brooke down for good.

The Bold And The Beautiful Spoilers – Douglas Forrester’s Intel

Now Douglas is telling the story to Ridge, Steffy, and Thomas Forrester (Matthew Atkinson). However, it appears that the Forrester trio doesn’t connect the dots right away. In fact, it’s not until the week of January 31 that Douglas is finally direct about it while talking to Thomas.

At first, Ridge will be confused and then shell-shocked. During the week of January 31, Ridge taunts and threatens Deacon Sharpe (Sean Kanan). Eventually, Ridge realizes that Brooke not only kissed Deacon, but that they spent the night together. Although nothing happened in bed, that will be beside the point.

The Bold And The Beautiful Spoilers – Taylor Hayes Offers Comfort

The Bold and the Beautiful spoilers reveal that Ridge will be heartbroken, devastated, and humiliated. Thomas and Steffy were right about Brooke, but Ridge kept defending his wife anyway. Ridge will turn to the one person who didn’t try to break up his marriage… his ex-wife, Taylor.

During the week of January 31, Taylor comforts Ridge after the truth about “Beacon” is exposed. Since this is a soap, it’s only natural to assume that “Tridge” will end up sharing a kiss and maybe more.

It is teased that Steffy will be infuriated that her father was betrayed by Brooke once again. Steffy isn’t going to take this lying down. In fact, Steffy plots to punish Brooke and take the serial cheater down for good.

However, who will help Steffy destroy Brooke? Could Steffy turn to an unexpected person to help her? Will Steffy join forces with another one of Brooke’s enemies, Sheila Carter (Kimberlin Brown)? It really depends on how badly Steffy wants to hurt Brooke.

Even though Steffy swore she would never let Sheila anywhere near her family, perhaps targeting Brooke will be what bonds them together. Let’s just hope that Steffy stays on guard as Sheila is extremely dangerous and unpredictable.