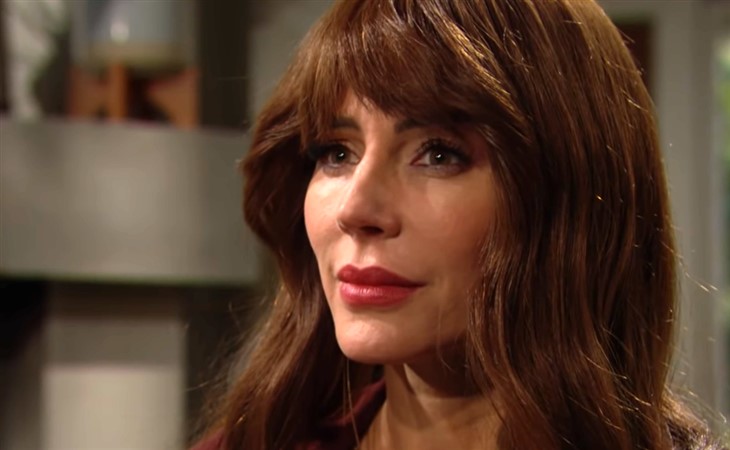 The Bold and the Beautiful (B&B) spoilers document Taylor Hayes (Krista Allen) does not want to put herself in a position where false hope dies. She does not know that Brooke Logan Forrester (Katherine Kelly Lang) has sabotaged herself and is lying to Ridge Forrester (Thorsten Kaye) about what happened after she began drinking alcohol.

Steffy Forrester Finnegan (Jacqueline MacInnes Wood) is tuned into modern Brooke drama. Unlike her mother, who has sporadically dropped into Los Angeles, California in recent years and was serving as a missionary from 2019 through late into 2021, Steffy senses that Brooke has once again upset Ridge’s life.

However, Steffy does not know what Brooke did. That is the predicate of what is to come on B&B.

The Bold And The Beautiful Spoilers – Sheila Carter Factor Is Important

If Sheila Carter (Kimberlin Brown) were not in LA Brooke would, in all likelihood, still be sober. But viewers know that Brown’s character switched the labels on bottles of champagne, which has thrown Brooke into a storm she never anticipated.

Taylor’s genuine kindness surprised Sheila. But because B&B’s most notorious villain remains off-balance, as Eric Forrester (John McCook) coldly told her during Steffy and John Finn Finnegan’s (Tanner Novlan) wedding reception, she is attempting to use Taylor’s compassion for gain.

Sheila’s plan worked better than expected, as Deacon Sharpe (Sean Kanan) involved himself with Brooke on New Year’s Eve to both of their detriments.

Taylor’s return to town bothered Brooke. That spoke to the lack of confidence she has in her marriage.

It is a bit much to believe that Brooke would feel so insecure since Ridge is her husband. It is not as though all these players in B&B’s enduring triangle are single, or Brooke and Taylor were openly vying for Ridge’s affections in modern times.

Accepting the plot as it is, fans know that Brooke’s unsettled demeanor played into her willingness to down shots of vodka with Deacon. Kanan’s character was right when saying that Brooke has feelings for him, regardless of her alcohol consumption. To what degree will be determined by the telegraphed fallout with Ridge.

Steffy is pushing more than a childlike dream of her parents reuniting. She also senses that her father can rediscover his passion for Taylor if he can pull himself away from Brooke.

This storyline will shift dramatically as soon as Steffy learns about Brooke’s relapse, and especially if she determines or is provided with the information about Deacon’s link to that night. That is what makes Sheila’s involvement crucial as well.

Sheila is grateful for Taylor’s compassion. But if Sheila realizes that she can present useful information to Steffy about Brooke, then a breakthrough with Finn’s wife becomes plausible.

GH Spoilers: Is Marshall The Enemy Brick Told Sonny About?