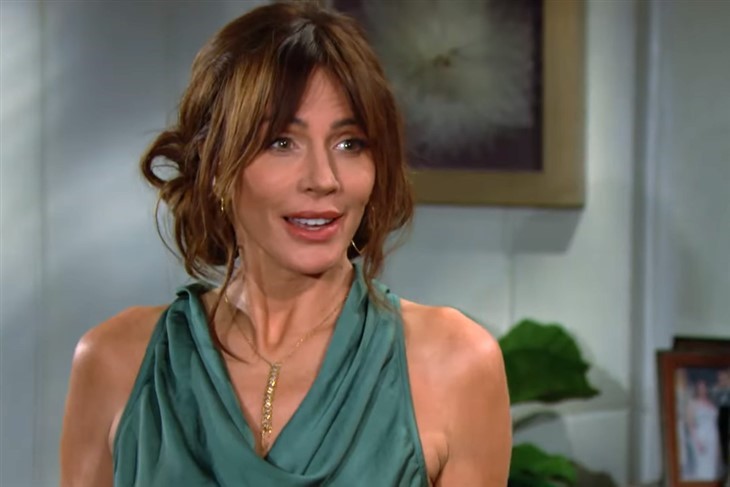 The Bold and The Beautiful spoilers and updates tease that Taylor Hayes (Krista Allen) will come to a difficult decision in Aspen as she takes time to know her heart. She told her and Ridge Forrester’s (Thorsten Kaye) daughter Steffy Forrester Finnegan (Jacqueline Macinnes Wood) she’s tired of Ridge’s waffling between her and Brooke Forrester (Katherine Kelly Lang).

The Bold And The Beautiful Spoilers – No Longer Always There

There wasn’t a lot that Taylor could do during the years that she was missing and presumed dead, and back home Ridge moved on with Brooke. She could hardly blame him with three children to raise as a single father when she was Dr. Taylor Ashford Hamilton-Hayes Forrester Rashid Forrester Marone Jones, Princess of Morocco. But when she came back, even when they reunited, there he was bouncing back and forth like a ping pong ball between her and Brooke.

According to The Bold and the Beautiful spoilers, Taylor has been pushed by Steffy and Thomas Forrester (Matthew Atkinson) and so has Ridge, to reunite once and for all. But Taylor is tired of the years of Ridge waffling, and she comes to a difficult realization; she can’t allow him to take for granted that she’ll always be there.

B & B Spoilers – If She Allows It To Continue, It Will

Taylor has always been there for Ridge if he needs or wants her, but she has realized that she is part of his waffling problem; he’s taking her for granted. And, if she allows it to continue, then his waffling and taking her for granted will likely continue, and she is being hurt as badly and as often by him. Taylor, Steffy and Thomas have all been telling Ridge that if he stays with Brooke, she will only continue to hurt him, but she must put a stop to the pattern. Someone has to force Ridge to stop waffling, and she can’t control him by being a doormat; it hurts her to realize this, but she has to protect herself.

The Bold And The Beautiful Spoilers – She Takes Her Own Counsel

As a therapist, Taylor has counseled many patients to break away from unhealthy relationship patterns, and she now must take her own counsel. Taylor has to take the difficult step of truly letting go of this man she has been in love with for years and break away herself. It won’t be easy, because sometimes true love can be like an addiction, especially if it’s one-sided, and if Ridge truly loved either her or Brooke, he wouldn’t continue to waffle.

This is certainly not what Steffy wants to hear from her mother, but she has to realize her father won’t likely change. For people to change, they have to want to change, and Ridge is staying in his same old patterns, so Taylor has to change her own.