B&B Spoilers: Taylor Almost Goes Through With It, Was She Secretly Happy About It? 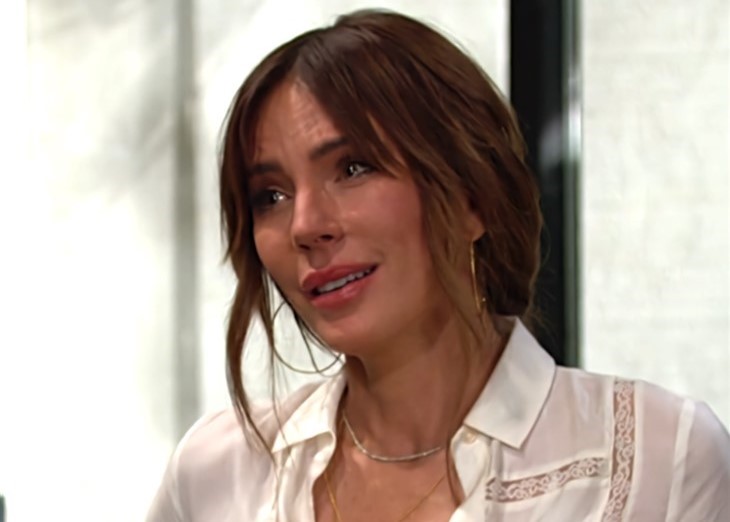 The Bold and the Beautiful spoilers show that since the news about Thomas Forrester’s (Matthew Atkinson) fake CPS phone call has been announced, the wedding between Ridge Forrester (Thorsten Kaye) and Taylor Hayes (Krista Allen) was officially over, however, it didn’t feel like Taylor wanted it to end.

While Ridge is now going over his own thoughts about the situation and trying to figure out what to do, Taylor seems like she wanted the marriage to go through and is having second thoughts about not going along with Thomas’s lie (not that it would have mattered with Steffy Forrester said something).

The Bold And The Beautiful Spoilers – Did Taylor Hayes Look Desperate?

Viewers noticed that Taylor seemed a bit desperate when asking Ridge about the wedding and if he really loved her and the phone call had nothing to do with why he left Brooke Logan (Katherine Kelly Lang). Unfortunately, Ridge knew that was the reason, and he had even told his family that that was a big turning point for him.

Fans reacted to Taylor’s pleas saying, “Taylor is sure showing signs of weakness in practically begging Ridge to marry her. Such a sad and pathetic display by Taylor. She had the right idea when she was running away from him.”, “Taylor was about to go through with a lie because she was so afraid of losing Ridge, she also was about to set a bad example to her grandson that it’s okay to do that.”,  and “I was very surprised that Taylor was going to marry ridge knowing what thomas did.”

B&B Spoilers – Was Tayor Hayes Glad About What Thomas Forrester (Matthew Atkinson) Did?

I think Taylor was secretly happy about what her son had done and giving her a chance to be happy with Ridge. It looked like she was ready to go along with it and basically begged Ridge to still marry her even after everyone had heard the truth.

It definitely looked like a weak moment for Taylor and hopefully she and Thomas don’t get together to plan something else, because I think there’s a chance that these two will come up with a new, sinister plan to get her back with Ridge once again.

What do you think? Should Ridge stop talking to Thomas and cut him out of his life for a while or will they be able to reconcile shortly? Share your thoughts and remember to keep watching the CBS soap to see what happens next.