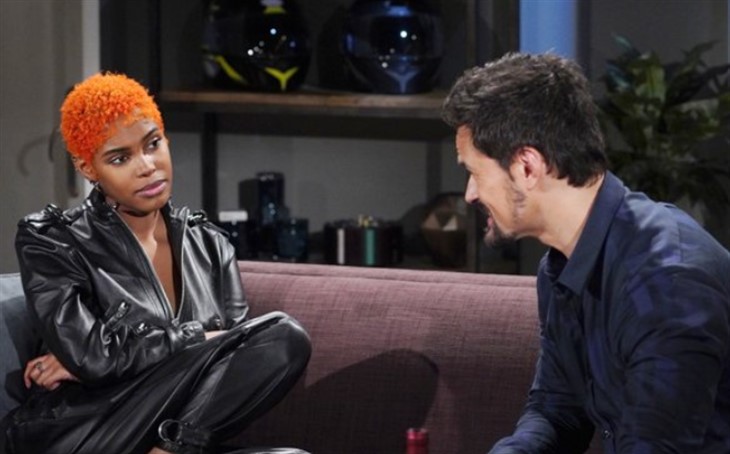 The Bold and the Beautiful (B&B) spoilers tease that bad boy Thomas Forrester (Matthew Atkinson) has done it again, messed up big time, and this time he will be cast into the weeds for his evil deed. But he may not be alone! What are the chances that one time paramour Paris Buckingham (Diamond White) reaches out to the troubled soul? After all she was initially touted as a world savior, and what has she done except model gowns at FC?

This girl needs to do some soul saving, and no one is needier right now than Thomas—will they get a second chance at love? Definitely maybe!

At one time Thomas was taken by Paris and vice versa. The writers dropped them like a hot potato however, and now would be the perfect time to redeem themselves.

There is no doubt that Thomas will always have a Hope Spencer (Annika Noelle) fixation, but that doesn’t mean he can’t move on with a beautiful and talented woman.

Not long ago Paris was thrilled to see Thomas’s naked torso in the office—then again who wouldn’t be thrilled outside of Liam Spencer (Scott Clifton)?

Paris was drooling over Thomas and let’s face it, now that his CPS call disaster is exposed he is a project that needs saving. Him being a beautiful bad boy is simply icing on top of the cupcake. Beefcake?

Paris’ social services background could emerge in sympathy to Thomas who will no doubt be shunned by his family for setting up Brooke Logan (Katherine Kelly Lang) in order for his parents Ridge Forrester (Thorsten Kaye) and Taylor Hayes (Krista Allen) to reunite. She also comes from a broken family and anyway, who is she to judge?

Of course many fans are asking if Thomas can even be saved at this point. Not just one fan has suggested he would need to save Brooke’s life to be redeemed—let’s hope it doesn’t go that far, and that a dramaliciously soapy pairing takes place instead. After all, the show has promised a new love for Thomas for forever, could be his final chance?

Be sure to catch up on everything happening with The Bold and the Beautiful. Come back here often for B&B spoilers, news, and updates.