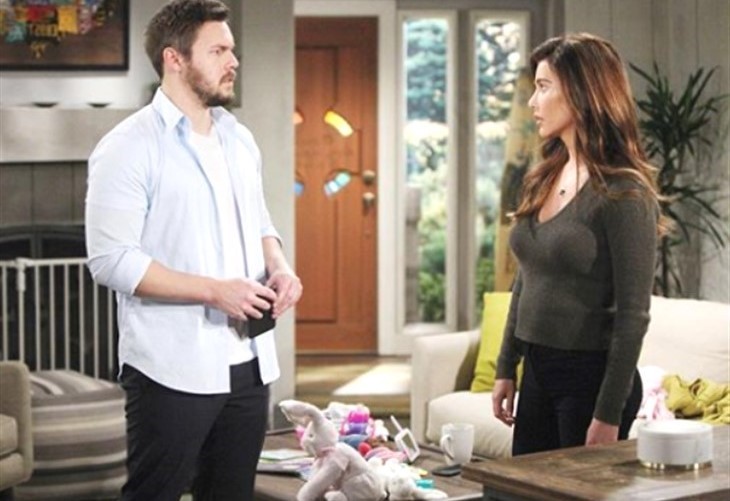 Viewers of The Bold and The Beautiful know that for the majority of the Forresters, and Liam, that Deacon is right up there with Sheila Carter (Kimberlin Brown) on the danger meter, and Liam talks to his ex-wife about how to protect Hope from not only Deacon, but from herself! Liam and Steffy both agree that Hope is way too trusting and naïve in her thinking Deacon is safe now that he’s done a few years in prison! There has to be some way to convince her to be more wary – more suspicious in her views of people. Steffy and Ridge both feel that people cannot and do not change – besides the evidence to the contrary in their own flesh and blood, namely Thomas Forrester (Matthew Atkinson)!

However, this may be a poor strategy for Liam, because for one thing, Hope is her own woman and does not appreciate being controlled. For the other thing, longtime viewers of The Bold and The Beautiful know that Liam needs to stay away from Steffy if it involves any alone time at all!

Viewers of The Bold and The Beautiful will see Steffy and Liam discuss some options. Neither of them trust Deacon and both know that there was some evidence that Deacon and Sheila were involved romantically recently, even though Deacon told Brooke Forrester (Katherine Kelly Lang) and Hope that the relationship was over.

In truth, there wasn’t one to begin with, it was only one of Sheila’s wild plots that she had pulled Deacon into, and Deacon may have been too embarrassed to tell Brooke and Hope the truth. Steffy and Liam are concerned that Hope allowing Deacon into her and her child’s life will bring Sheila in as well! Viewers of The Bold and The Beautiful will recall that Sheila has already made several intrusions trying to get next to John “Finn” Finnegan (Tanner Novlan) and baby Hayes Forrester Finnegan (Piper Harriott) and figures she’s using Deacon as a way to get into the family, since Deacon is trying to get into the family also.

Viewers of The Bold and The Beautiful know that although Hope has her own clothing line at Forrester Creations called “Hope For The Future”, Steffy is still her boss. Steffy reports to her father, Ridge Forrester (Thorsten Kaye) for some things but she knows he’ll be on board with her idea. Ridge despises Deacon – and he also suspects he’s in league with Sheila and up to despicable things.

Steffy knows there must be a work-life balance when someone has children, because she’s a mother herself, but knows that Liam can step up to care for Beth Spencer (River Davison) if need be and Thomas Forrester (Matthew Atkinson) already has Douglas Forrester (Henry Joseph Samiri) most of the time. Viewers of The Bold and The Beautiful won’t be surprised that Liam agrees that keeping Hope too busy to have any interaction with Deacon is a great idea – that way it won’t seem so personal.