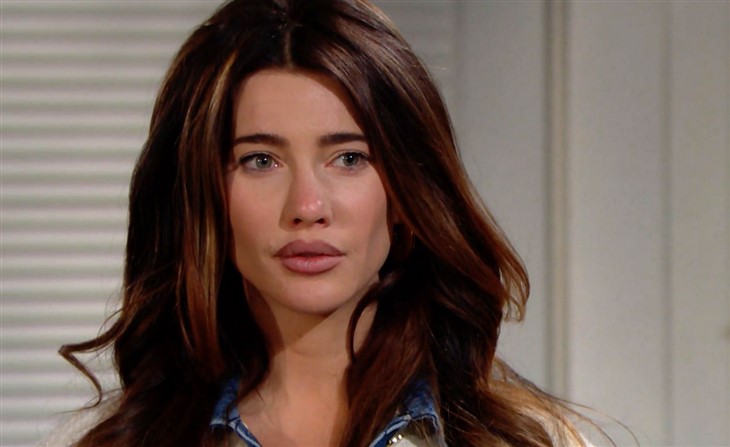 The Bold and the Beautiful (B&B) spoilers document Steffy Forrester Finnegan (Jacqueline MacInnes Wood) sees an opening for her mother. Steffy’s dad, Ridge Forrester (Thorsten Kaye), is having problems with his wife, which continues a pattern that has been seen over decades.

Taylor Hayes (Krista Allen) returned to Los Angeles, California, because she missed her family. Steffy, her family, Thomas Forrester (Matthew Atkinson), and his son represent the most meaningful parts of Taylor’s life. But Ridge is part of Taylor’s family as well.

Meanwhile, in Loganville, meaning the mansion, Brooke Logan Forrester (Katherine Kelly Lang) told Ridge that she started drinking again. Her disappointment in herself and apologetic nature should signal that support will be forthcoming from Ridge. Well, not for long.

Steffy believes that her parents should have never split the first time. But Ridge and Taylor divorced, remarried, and divorced again in daytime days gone by. History will not stop Steffy from pushing hard for Taylor and Ridge to reconcile.

Brooke is not arguably the love of Ridge’s life. She is that based on their eight marriages. But Taylor holds an important place in Ridge’s heart that is not occupied by Brooke.

So, Steffy and Thomas’ feelings about what should have been aside, what will matter is whether Ridge believes a reconciliation with Taylor is possible. That part of the plot will follow after Brooke’s New Year’s Eve actions are revealed.

Hope would have preferred if her parents never split. Brooke and Deacon Sharpe (Sean Kanan) came together due to scandalous circumstances, as hardcore B&B fans know.

As far as modern times, Deacon’s role in Brooke’s drinking and his overnight stay implies that a reunion, of sorts, is unlikely for Hope’s parents. But, if Ridge leaves Brooke and returns to Taylor, then Deacon could be the source of compassion that Lang’s character seeks.

Noelle’s character is very close to her mother and has quickly formed a bond with her dad. The drama that is unfolding could deepen all ties eventually.

Deacon has restrained himself since being released from prison. But every man has his limits.

Ridge does not trust Deacon and will not see his side whenever Brooke admits or volunteers what she did. A coming battle, including the real potential of a physical confrontation or confrontations between both men who love Brooke, feels inevitable. But maybe Deacon will not be the one going to prison when that clash or those confrontations happen?