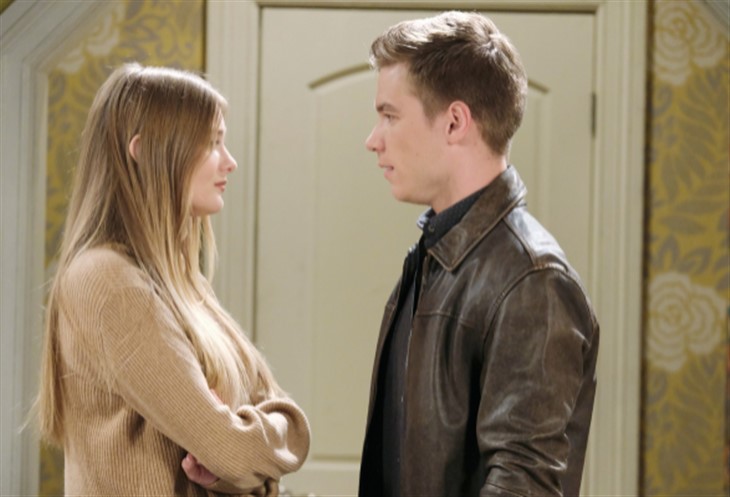 DOOL spoilers reveal that Allie apologized for her harsh reaction to Chanel and Johnny’s marriage. Just when Allie and others began accepting the wedded union, Johnny drops a bombshell. Nobody realizes that Johnny is possessed by the devil, though. At least, not as of the Friday, January 7 episode.

While Johnny might still love Chanel, “Jo-Devil” doesn’t love anyone. The devil creates controversy and chaos by publicly humiliating Chanel. “Jo-Devil” passionately kisses Chanel, then announces to everyone that he doesn’t want her. Instead, Johnny wants to follow in Stefano DiMera’s (formerly Joseph Mascolo) footsteps.

Chanel runs out of her wedding reception and Allie follows her. Allie tries to console her best friend. However, Allie is caught off guard when she shares a kiss with Chanel. It doesn’t just stop at kissing, though. Allie and Chanel take their passion a step further. Even though it is unexpected for Allie, actress Lindsay Arnold told Soap Opera Digest that it “feels right.” So, she betrays Tripp anyway.

Days Of Our Lives Spoilers – Allie Horton’s Night of Passion

Days of Our Lives spoilers reveal that fans expected Chanel and Allie’s love triangle to resurface at some point. Chanel was pretty clear about her feelings, but this is new for Allie. Unsure of how she really feels or how to deal with her conflicted heart, Allie will once again be filled with turmoil.

Allie and Chanel share a night of passion by sleeping together. The next morning, Allie gets a phone call from Tripp. As fans recall, Tripp wasn’t able to make it to the wedding reception at the DiMera mansion. Tripp was called in to work, so he will probably get a quick update from Allie. However, will she tell him the truth about spending the night with Chanel?

Allie doesn’t confess to Tripp when he calls. Instead, she lies to him and says that she comforted Chanel after the wedding reception. Allie adds that Chanel left the night before, implying that she woke up in bed by herself.

The truth always comes out in soaps and we have a feeling that Allie’s secret will somehow get back to Tripp. Will it be “Jo-Devil” who exposes Allie’s tryst? Or will it be Chanel, who probably doesn’t appreciate being kept a dirty little secret?

Be sure to catch up on everything happening with DOOL right now. Come back often for Days of Our Lives spoilers, news, and updates

Is A Prolific Fan Account Run By A Duggar Family Member?