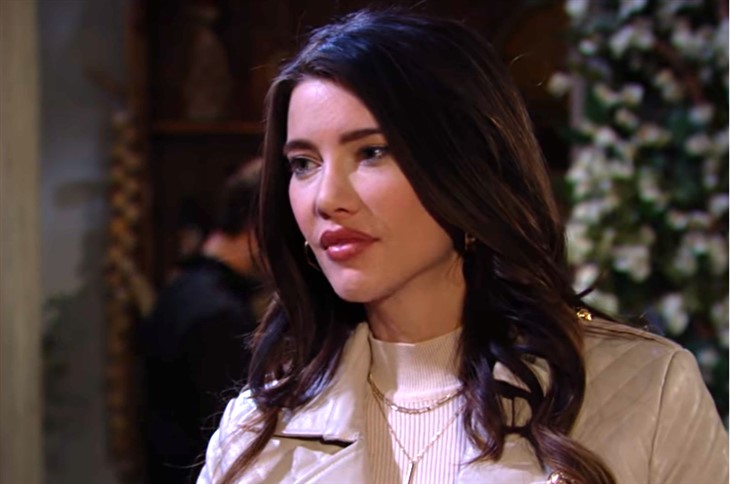 The Bold and The Beautiful spoilers and updates tease that Steffy Forrester Finnegan (Jacqueline Macinnes Wood) will soon get full memory back! She’ll finger Sheila Carter (Kimberlin Brown) as the shooter in an upcoming episode of B & B!

The Bold And The Beautiful Spoilers – Fuzzy Flashbacks And Uncertain Details

So far, Steffy has had some fuzzy flashbacks with uncertain details – although she will get total recall soon. Her memories of her late husband Dr. John “Finn” Finnegan (Tanner Novlan) started the same way, then when she was shown photos it started to all come back. She still hasn’t remembered much about the night of the shooting, but that is on its way – she saw the same blurry rainbow images of Sheila.

Her mind is still protecting her from the bad and traumatic memories, but she is remembering the good ones. Any memory retrieval is good, considering she started remembering when she was married to Liam Spencer (Scott Clifton) and Kelly Spencer (Sophia Paras McKinlay) was a toddler!

B & B Spoilers – Her Family Keeps Pressing For Details

Of course, Steffy’s family has kept pressing her for details about the night of the shooting – any little detail might help the police find the perp. Thomas Forrester (Matthew Atkinson) likely suspects Sheila’s behind it, but he’s in a tough spot to voice his suspicions. Sheila just saved his mother’s life and the fact Sheila shot and killed her own son may have thrown him!  He knows that the shooting took place in the alleyway behind Il Giardino, the same place he and Sheila had been meeting to talk! But if he were to say anything, he could put his family in danger so he’ll likely keep quiet! Besides, he is not an actual witness to the shooting so he’d be no good to the police!

The Bold And The Beautiful Spoilers – Memories Will Come Back

As Steffy begins to cope with her widowhood and accept Finn was killed, some of the trauma and shock from what she was told will heal, slowly. With the healing of her mind and psyche more memories will start coming until she remembers what happened the night she and Finn were shot. It may not come as a blow by blow memory, but she may remember just Sheila pointing the gun and her mind will fill in the rest.

Remembering the sight of Finn jumping in front of her and taking the bullet may not come right away and there’s a chance it never will. It will be all too painful, but just remembering Sheila pointing the gun will be enough for investigators to start with considering Sheila’s years long rap sheet!

Steffy may not remember everything by the end of May sweeps, but it will be enough to finger Sheila as the shooter of herself and the murderer of Finn! Even though Sheila didn’t intend to kill her son, the intent to shoot Steffy was there, and that intent will be taken as to kill!

The Bold and the Beautiful spoilers show Sheila wouldn’t be able to prove that she was just pointing a gun at Steffy to scare her, but even if she could it would still be a chargeable crime! Steffy will want to call it murder, as will Li Finnegan (Naomi Matsuda), undoubtedly. Considering the shootings were obviously at close range, murder would be what they start with as a charge, because who shoots someone at close range without it being intentional?

Who Plays Baby Dominic On The Young And The Restless?