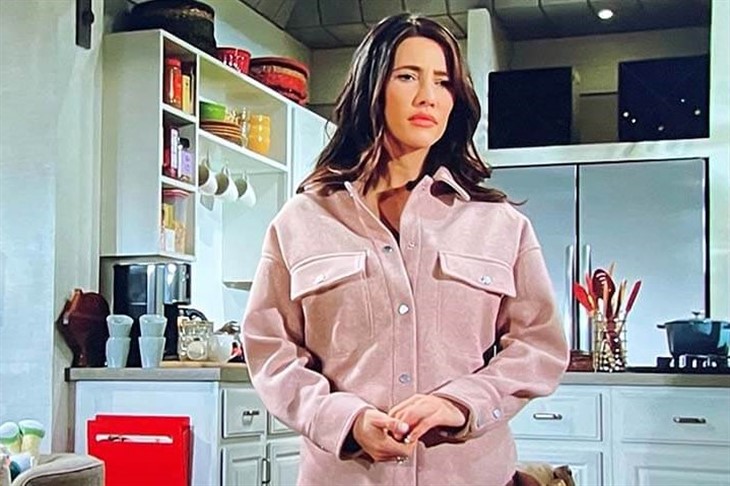 The Bold and the Beautiful (B&B) spoilers reveal that Jacqueline MacInnes Wood (Steffy Forrester Finnegan) will go on maternity leave. It was assumed the coma was Steffy’s temporary exit. However, Steffy woke up and goes home during the week of May 2. So, how will the actress leave? Could Steffy enter the witness protection program when she is attacked again?

The Bold And The Beautiful Spoilers – Steffy Forrester Finnegan Uneasy

B&B spoilers reveal that Steffy comes home from the hospital during the week of May 2. After she settles in at the house, Sheila Carter (Kimberlin Brown) shows up wanting to visit Hayes Forrester Finnegan (Piper Harriot). However, Steffy gets an uneasy feeling when she is around Sheila.

It should be noted that Steffy has always been uneasy around the villain. However, this will be intensified during this specific interaction.

Sheila is determined to make sure that Steffy can’t tell anyone what she did. Now that Steffy remembers John “Finn” Finnegan (Tanner Novlan), she will eventually recall the shooting that destroyed their lives. It’s not a matter of if but when. That is confirmed in Soap Opera Digest magazine. In fact, the publication writes that Steffy has a “total recall” about what Sheila did.

So, when Sheila is backed into a corner, she could easily attack Steffy again. Head writer and executive producer Bradley Bell told the magazine,

“May is really about Steffy’s journey and making sure that there is justice and making Sheila pay for her atrocities. I think May is going to be a very entertaining month and one to tune in for.”

The Bold and the Beautiful spoilers reveal that Steffy won’t die but will need an exit so she can go on maternity leave. Another attack would certainly do that but perhaps there is another way for the character to make a temporary exit.

If Steffy is able to tell the authorities that Sheila is responsible, the villain will likely go into hiding. Everyone knows that Sheila won’t stop trying to kill Steffy until she is stopped. So, perhaps Steffy will enter the witness protection program. When Wood is ready to come back to work after the maternity leave, maybe Sheila will finally get caught and pay for her crimes.

How do you think the writers will give Steffy a temporary exit for maternity leave? Will Sheila attack Steffy after she comes home from the hospital? Will it require authorities to put Steffy in witness protection until Sheila is found? Share your thoughts and remember to keep watching the CBS soap to see what happens next.

Y&R Spoilers: Ashland And Diane Are An Imperfect Pairing – Victoria Is Jealous?