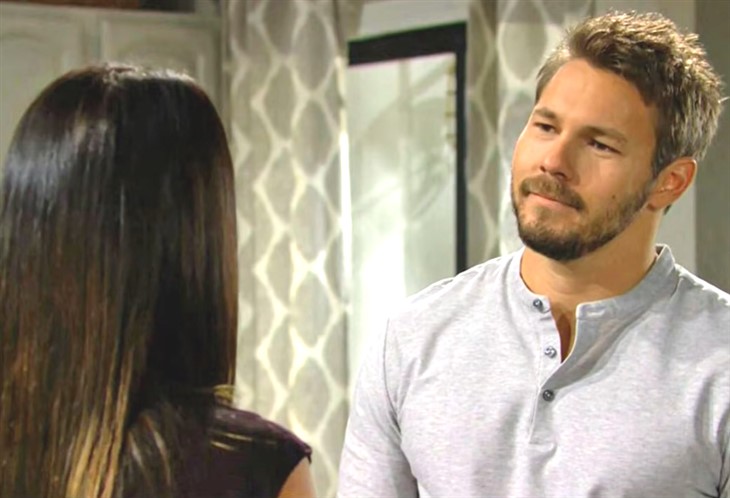 The Bold and The Beautiful (B&B) spoilers and updates tease that Liam Spencer (Scott Clifton) will help Steffy Forrester Finnegan (Jaqueline Macinnes Wood) out at home by staying there in upcoming B & B episodes!

Liam is by Steffy’s side all the way as she is released from the hospital and returns home, although her return is with mixed emotions. Steffy is joyous over reuniting with both of her children, but mourning the death of Hayes Forrester Finnegan’s (Piper Harriot) father. Kelly Spencer (Sophia Paras McKinlay) will be old enough to grieve John “Finn” Finnegan (Tanner Novlan) and telling her will be difficult to deal with.

Baby Hayes may actually be too young to remember very much about his father, although he likely does miss him. Kelly and Hayes’ care is shared by their nanny but their parenting is a different story – Liam wants to be there to help.

B & B Spoilers – Liam Spencer Spends The Night – Platonically

It’s easy to see why Hope Spencer (Annika Noelle) would be bugged by Liam feeling he has to spend the night at the cliff house to comfort a devastated Steffy. After all, her mother, Taylor Hayes (Krista Allen) should be doing that and lives there in the house with her father, Ridge Forrester (Thorsten Kaye) visits frequently. This will be a topic of conversation between Hope and her mother, Brooke Forrester (Katherine Kelly Lang) frequently, not just the day Steffy is released! They will wonder if there is an agenda already to pair Steffy and Liam back together when Finn’s not even cold in the grave! Just how long before that very old portrait of Liam and Steffy together goes back up?!

Despite appearances to the contrary, Liam claims he’s not torn, but he still loves Steffy in spite of being one hundred percent committed to Hope! Liam nearly almost always fails at doing the right thing, however, and Hope is not comfortable with Liam’s plan of action to help Steffy! After all, how can she trust a man with all his heart who thinks a mannequin was her, and making out with Thomas Forrester (Matthew Atkinson)?

That was the last time he spent the night with Steffy and there was a “who’s the daddy” question over Hayes! It took quite a while for Hope to even begin to trust Liam or Steffy after that happened, although sweet Finn was very understanding!

For now, Liam is totally committed to Hope but still totally loves Steffy; he will always be tied to each woman for life because he has a daughter with each! That, of course, is to be expected and Hope understands his bond with Kelly and his need to be there for her as her father. But their daughter needs their father too, and it looks like he will be with Steffy and Kelly a lot more than with Hope and Beth Spencer (River Davison)! For Hope, and for the ever interfering Brooke, that is simply unacceptable!