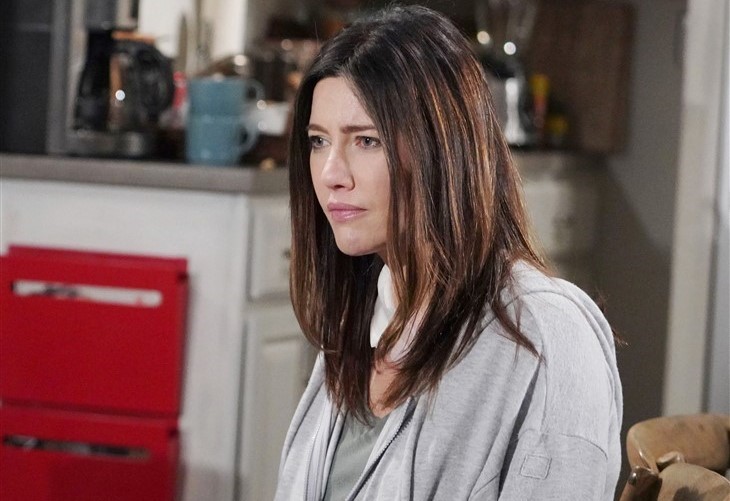 As the audience witnessed, Deacon Sharpe (Sean Kanan) came to Sheila’s hotel suite, where she has lived since returning to Los Angeles, California months ago. While Deacon was pounding on the door, demanding to be let in, Sheila put Finn’s items and possibly Steffy’s in her suitcase and zipped it shut.

The Bold And The Beautiful Spoilers – Deacon Sharpe Misreads Outcome

Deacon believes he sees a woman who is deep in the throes of grief. While that is true, Sheila’s guilt has overridden any other feelings she has since shooting Finn dead.

Kanan’s character may be in the most dangerous position because of his semi-regular contact with Sheila. She told him that it would be best for everyone if she leaves LA.

Sheila’s intent to skip town is based on her belief that Steffy’s memory will return, which has now happened.

B&B Spoilers – The Past Comes Alive At The Cliff House

Kudos to Wood for another solid set of performances. She displayed a range of emotions as Steffy pieced together what happened the night Finn died, and Sheila temporarily silenced her with another shot.

Ridge Forrester (Thorsten Kaye) and Taylor Hayes (Krista Allen) became the witnesses to Steffy’s recovered eyewitness account in the cliff house living room. Taylor did not want to believe that Sheila could be the shooter.

Taylor’s initial response to Steffy’s recovered memories of what happened in the alley behind Il Giordino was based on her bond with Sheila. So, Sheila’s save of Taylor on the hospital roof now means little or nothing.

The Bold And The Beautiful Spoilers – Time To Wrap This Up

Teasers indicate that Deputy Chief Bradley Baker (Dan Martin) will be informed about Steffy’s account and will arrest Sheila. Unless she has disposed of the evidence in her suitcase, the LA Police Department should come to obtain it.

The above would indicate an open and shut case. But this is B&B, and Sheila has often created ways to wiggle away from justice being served against her.

Steffy wants her husband’s killer, who just so happens to be his mother, dealt with. But will Sheila be contained in an LA jail cell, escape from it, or otherwise thumb her nose at the law?