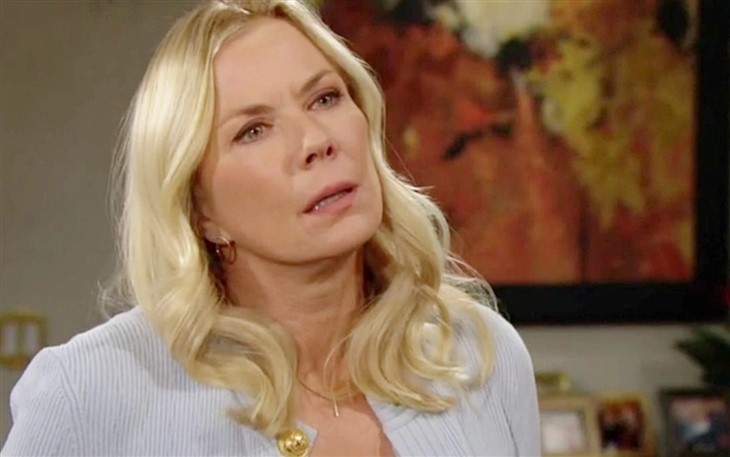 The Bold and the Beautiful spoilers reveal that Sheila Carter (Kimberlin Brown) is arrested. Not only will the shooting bombshell come out but so will the champagne switcheroo. Brooke Logan Forrester (Katherine Kelly Lang) still won’t have Ridge Forrester (Thorsten Kaye) back. So, expect a rageful confrontation.

The Bold And The Beautiful Spoilers – Brooke Logan Forrester Perplexed

B&B spoilers reveal that Brooke remains confused about what exactly triggered her to drink on New Year’s Eve. Brooke keeps telling everyone that she’s always been able to be around alcohol with no problem. Plus, she was enjoying non-alcoholic champagne and doesn’t remember when she suddenly switched to real alcohol.

Brooke thinks that if she could just figure it out, then everything would make sense. Brooke might also suspect that if she can explain how it happened, she might have a better chance of getting Ridge back.

So, the truth about Sheila tricking Brooke into drinking real alcohol will also be exposed. If it’s not exposed this week, then Brooke will find out in the next few weeks.

The Bold And The Beautiful Spoilers – Too Late To Fix ‘Bridge’

The Bold and the Beautiful spoilers reveal that when Ridge learns that Brooke’s relapse was caused by Sheila, his stance will change. Ridge won’t go back to Brooke – at least, not right now. However, Ridge will soften his attitude toward Brooke.

The problem is that Ridge has already reconnected to Taylor. So, he will be in a quandary and won’t know which woman he should be with. Perhaps “Bridge” will eventually get back together. Of course, there is always the possibility that writers won’t be so predictable. Fans could be surprised to see “Bridge” go their separate ways even after the truth comes out.

After Brooke learns that her relapse was a setup masterminded by Sheila, she will want to confront her. It’s possible that Brooke will get to visit Sheila in jail. Brooke will lash out at Sheila but might also gloat about the villain never getting out of prison.

That’s Brooke’s big mistake, though. Instead of just being thankful the secret is out and avoiding setting off Sheila again, she must stir up more drama.

Brown is on contract and won’t be behind bars for long. In fact, the actress teased her return to the set. On Instagram, Brown pondered what Sheila is going to do next. So, Brooke might make herself an unnecessary target all over again by opening up her big mouth.