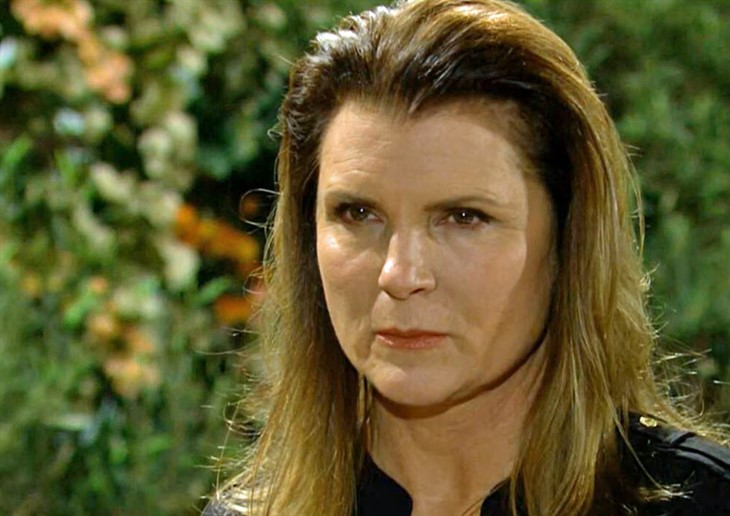 The Bold and the Beautiful spoilers reveal that Steffy Forrester Finnegan (Jacqueline MacInnes Wood) remembers the identity of the shooter. Steffy will confront Sheila Carter (Kimberlin Brown) with Deputy Chief Bradley Baker (Dan Martin) hidden nearby listening to every word. However, don’t expect Sheila to go to prison. The actress teased her return to the set.

The Bold And The Beautiful Spoilers – Steffy Forrester Finnegan’s Confrontation

B&B spoilers reveal that Steffy finally remembers exactly what happened the night of the shooting. Steffy is horrified to realize that Sheila killed her own son. Steffy is also devastated to learn that she is only alive because of John “Finn” Finnegan’s (formerly played by Tanner Novlan) sacrifice.

Steffy calls Sheila and gives the villain hope that they can have a real relationship. Sheila falls for it and returns to Steffy’s house. That is when Steffy unleashes her fury on the monster-in-law. However, Steffy doesn’t confront Sheila alone. Ridge Forrester (Thorsten Kaye) and Taylor Hayes (Krista Allen) are present. Plus, Steffy calls Baker as backup.

It is speculated that Baker will hear Steffy confront Sheila. Baker will probably also hear Sheila admit to killing Finn. So, Sheila will probably be arrested but don’t expect her to spend a day in prison.

The Bold And The Beautiful Spoiler – Kimberlin Brown on Contract

The Bold and the Beautiful spoilers reveal that actress Kimberlin Brown is on contract. Some contracts can be short and there is no word on the length of Brown’s. However, the actress hinted that Sheila’s going to be sticking around for a while. So, that indicates Sheila won’t go to prison.

B&B Spoilers – Only A Brief Absence

Most likely, Sheila’s mental health history and hearing voices during the shooting will play a part in her fate. Plus, Sheila’s suicide attempt might also get her a psychiatric hospitalization rather than prison.

In fact, Brown posted on Instagram about her recent vacation. When Sheila disappears from the CBS soap, it will likely be at the same time as Brown going on vacation. However, it is also hinted that Brown is returning to the set. Check out what Brown posted about returning to Los Angeles,

“The weather has been amazing this past week! Almost time to head back to L.A. I wonder what Sheila is planning next!”

It sounds like Sheila is far from done. What does the future hold for Sheila, Steffy, and the rest of the characters? Is Finn really dead or could he be in hiding somewhere? We will have to keep watching the CBS soap to find out what happens next.